Jorge Linares vs. Ricky Burns on September 7 in Glasgow, Scotland 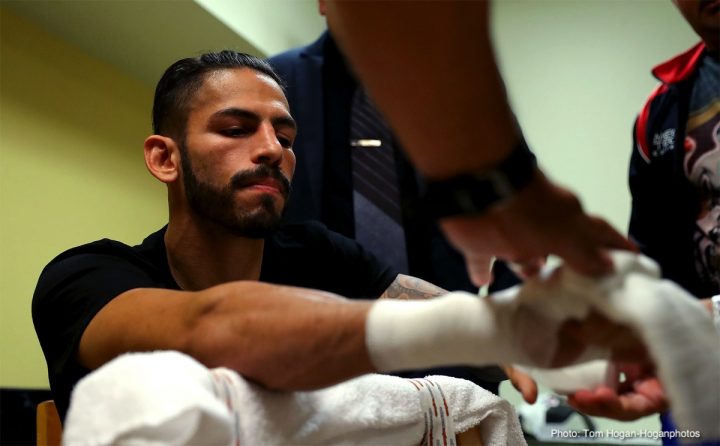 By Jeff Aranow: Ricky Burns and Jorge Linares will be meeting up in two months from now in a WBA lightweight title eliminator in the main event on September 7 at the SSE Hydro in Glasgow, Scotland. The winner of the Burns vs. Linares fight will be the mandatory for WBA 135 pound champion Vasiliy Lomachenko.

This is a tough match-up for former three division world champion Burns (43-7-1, 16 KOs), but he’ll at least be fighting the 33-year-old Linares (45-5, 28 KOs) at home in Glasgow, Scotland. That might be enough for the 36-year-old Burns to pull off an upset against Linares, who is still fighting at a high level. Burns is obviously not the same fighter he was in the prime of his career from 2010 to 2013. In the last six years, Burns has lost to Anthony Crolla, Julius Indongo, Omar Figueroa Jr., Dejan Zlaticanin and Terence Crawford. Burns arguably deserved a loss in his fight against Ray Beltran in 2013. That fight was scored as a 12 round draw.

Linares has done well in beating British fighters Anthony Crolla [x 2], Luke Campbell and Kevin Mitchell. One reason for that is Linares thrives on fighting in front of large crowds, and his fights in the UK have been well attended. Burns fights well in front of large crowds too, and he’s going to be fighting tooth and nail to get the victory. Linares will need to bring his A-game if he doesn’t want to get knocked out again.

If the Linares-Burns fight had taken place last year, Linares would have had an excellent shot at winning, but right now it’s arguably an even fight.

Linares’ career is on the brink of collapse

Former three division world champion Linares has been struggling lately in losing two out of his last three fights in losses to Pablo Cesar Cano and Lomachenko. Linares made the mistake of moving up to 140 in his last fight in January, and he was stopped in the first round by fringe contender Cano (32-7-1, 22 KOs) at Madison Square Garden in New York. Linares came out slugging against the 29-year-old Cano, and he wasn’t ready for the fire power from the hard hitting Mexican fighter. If Cano had come down to lightweight or super featherweight, Linares would have had a good shot at beating him. But at light welterweight, Linares was in with a guy looked like a junior middleweight after he rehyrated. Cano was too big for Linares, and he steamrolled him.

Cano knocked Linares down three times before referee Ricky Gonzalez stopped the contest. Last year in May, Linares lost his World Boxing Association lightweight title to Lomachenko by a 10th round knockout in a competitive fight. Linares chose to move up to light welterweight after the defeat, and it turned out to be the wrong move for him. Although Linares won his first fight at 140 in stopping journeyman Abner Cotto in the third round last September, he wasn’t ready to take on a big puncher like Cano.

Both of these fighters are on the downside of their careers after winning world titles in three divisions a piece. Of the two, Linares might have a little bit more left, but you can’t count Burns out. With the stoppage loss that the Venezuelan born Linares suffered against Cano last January, it’s quite possible that Burns could knock him out if he loads up with a big head shot. Burns isn’t much of a puncher, but he’s capable of finding a little power when he puts everything he has into his shots. Of course, if Burns swings for the fences, he could leave himself open to a big counter by Linares.

It’s probably worth the risk for Burns to go all out for a knockout, because he’s not going to out-box a talented fighter like Linares. That’s not going to happen. Burns isn’t that kind of a talent. He’s always been a blue-collar level fighter, who won his fights by roughing up and out-smarting his opponents.

The loser of this fight might want to consider retirement, because there’s nowhere for them to go. Even the winner of the Burns-Linares fight is going to be in for a world of hurt in facing WBA champion Lomachenko. It’ll be a nice payday for the Linares vs. Burns winner, but they’re not going to beat Lomachenko with the way he’s fighting right now.

Having the Linares-Burns fight take place in Glasgow  may help Burns if the fight goes to the scorecards. For the fans that remember Burns’ fight with Beltran in 2013, they saw how important it is for Ricky to be fighting at home in Glasgow. Beltran appeared to win the fight by a 10 rounds to 2 score, but instead he had to settle for a draw. Burns never gave Beltran a rematch despite all the controversy from the fight.