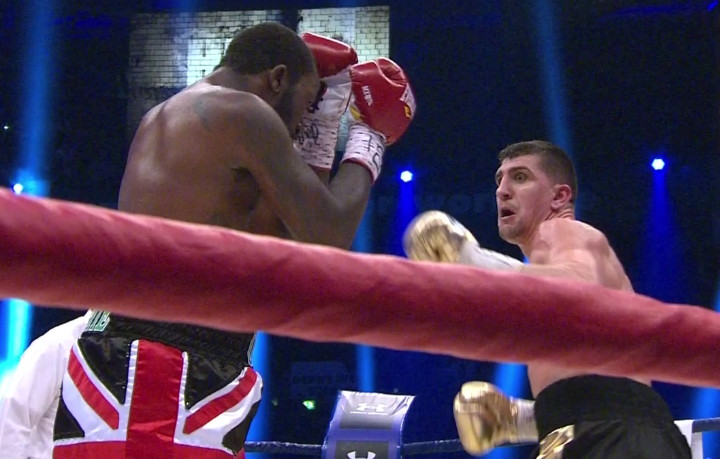 By Jeff Aranow: Fighting each other for the fourth time, former WBO cruiserweight champion Marco Huck (39-3-1, 26 KOs) stopped #4 IBF Olab Afolabi (22-5-4, 11 KOs) at the end of the 10th round on Saturday night to capture the 35-year-old Afolabi’s IBO cruiserweight title at the Gerry Weber Stadium in Halle, Germany.

The fight was halted at the end of the 10th round due to Afolabi’s left eye being completely closed. Afolabi’s right eye was closing from the 1st round. Huck and Afolabi clashed heads with Afolabi getting the worst of it.

In the 6th, Huck reared back and clubbed Afolabi in his left eye when the two of them were in a clinch, causing Afolabi to wince in pain and pull away and bend forward. Huck then tried to finish a near defenseless Afolabi off with a clubbing right hand to the back of his head, but he missed.

Huck lost a point in the 9th round for continuing to hit Afolabi after the round had clearly ended. Huck had Afolabi against the ropes and he got carried away and just kept punching after the bell had sounded.

Huck, 31, got away with a lot of rabbit punches in the fight, especially in the later rounds where he was teeing off with punches to the back of Afolabi’s head. Huck was fortunate that this wasn’t a contest for the World Boxing Council belt, because they now have strict rules in place to prevent rabbit punches from being thrown. Huck was throwing rabbit shots frequently in the 8th round.

Huck fought in spurts like he always does. He would cover up and let Afolabi land some shots. He would then attack with flurries until he tired. Afolabi didn’t have the presence of mind to catch Huck with shots while he was throwing his flurries the way that his last opponent Krzystof Glowaki was able to do last August. Glowacki was smart. Instead of him cowering and doing nothing while Huck would unload his shots, he would fire back punches in between Huck’s flurries. Eventually, he knocked him out. Afolabi fought like a sparring partner with the way he would just cover up while Huck unloaded on him. That wasn’t smart, but I guess that’s why Huck chose to fight him. Afolabi had fought the same way in their three prior fights, so Huck knew what he was getting with him. Afolabi was no real threat because he doesn’t punch with him. He just covers up.

This was Huck’s first fight since being stopped in the 11th round last August by Krzysztof Glowacki. Huck looked good tonight, but he was facing an aging fighter in the 35-year-old Afolabi and not a younger fighter like Glowacki or Olesandr Usyk. Those guys are much more dangerous fighters than an old lion like Afolabi.