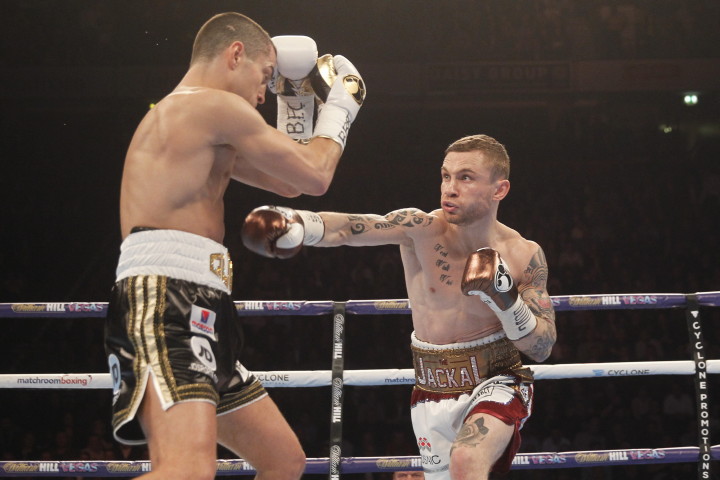 Many of the first six rounds very close and could have gone either way. Quigg was clearly the better fighter in the second half of the fight, and I had him winning four of the last six rounds. The judges scored it 116-112 and 116-112 for Frampton and 115-113 for Quigg. The fight looked close enough to be scored a draw. You could even state a case where Quigg deserved a narrow win because he landed the better shots in every round of the fight. He just wasn’t landing as many as Frampton was. Quigg was missing a lot of punches due to Frampton’s defense, and because he was loading up to much.

The 29-year-old McDonnell knocked the little known 25-year-old Sanchez down with a right hand to the head in the 2nd round. Other than that one knockdown, there was no other drama in the fight. It was a real workmanlike performance from McDonnell. Sanchez didn’t have the power or the talent to do much against the much taller McDonnell.

After the fight, #9 WBC McDonnell spoke of wanting to fight for a world title. Right now, you would have to favor McDonnell against WBC super bantamweight champion Julio Ceja. The hardest part would be to get a shot at the belt. It be a while before McDonnell can get a shot at Ceja’s title.

Undefeated bantamweight prospect Ryan Burnett (13-0, 9 KOs) picked up his 13th win of his career in defeating Frances’s Anthony Settoul (21-5, 8 KOs) by a 10 round unanimous decision to win the vacant WBC International bantamweight title.

Burton dropped Shinkwin in the 2nd and 5th rounds. Referee Victor Loughlin stopped the contest at 1:13 of the 6th round.

« Hughie Fury’s next fight could be announced on Tuesday