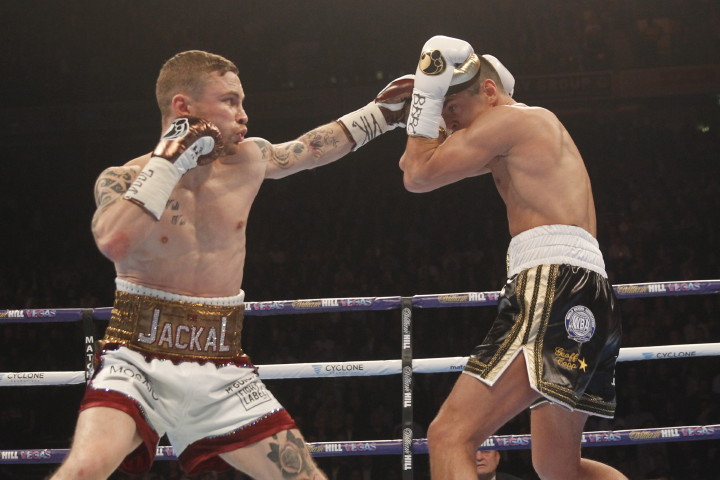 The final judges’ scores were 116-112 and 116-112 for Frampton and 115-113 for Quigg. I thought the fight was a heck of a lot wider than those scores. Those were incredibly poor scores. I don’t know what the judge was thinking who scored the fight for Quigg. He must have gotten mixed up in not realizing which one was Frampton, because anyone could have scored this fight correctly.

There was only one obvious winner in this fight and that was Frampton. Quigg fought like he had no sense at all much of the time. He was just throwing crazy shots like a wild man. It looked like the 27-year-old Quigg had no sense at all with the way he was fighting. The only thing he had going for him in the fight was his size and punching power. If you took those two things away from Quigg, he would have been completely lost. Frampton was just so much better.

“There was only one winner and that was Carl. I don’t know how that judge got that score,” said Frampton’s manager Barry McGuigan.

McGuigan started blabbering when asked if Frampton would fight Guillermo Rigondeaux next. McGuigan started talking about Frampton needing a vacation and other such nonsense. In other words, it doesn’t look like Rigondeaux will be getting a fight. This means that Frampton will have to vacate the WBA title that he just won, because the World Boxing Association already said that the winner of the Frampton-Quigg fight must fight Rigondeaux next. It doesn’t look like Frampton or McGuigan are up for that.

“Sure, we can do it again,” said Frampton. “I’m happy to campaign at super bantamweight, but if a big fight comes along like Leo Santa Cruz, I’m for it.”

“I would like a rematch,” Quigg said after the fight.

Quigg was landing with more power, but he was missing like mad and that obviously hurt his case to win the fight.

Quigg made a mistake by not starting faster in the fight. He basically gave away the first six rounds by not fighting in an all out manner that he needed to in order to get the win. By the time that Quigg finally started fighting with a lot of aggression, he was in need of a knockout to win.

In the 11th round, Quigg appeared to hurt Frampton with a right to the jaw. Frampton bent forward after taking the shot, and Quigg nailed him with a couple of more shots. However, there was no momentum at all for Quigg, as Frampton came out on fire in the 12th round and was able to dominate the round with his accurate combination punching. I don’t think Frampton missed one punch in the final round. Frampton even did the Ali shuffle in the 12th round, as he was totally clowning Quigg. I’m not sure what happened to Quigg. He looked good in the 11th, but he had nothing left in the 12th. It’s like Quigg shot his load in the 11th and had nothing left in the 12th. Frampton looked like a totally different fighter with the way he came out fast for the final round. It was like he was shot out of a cannon. Frampton was relentless in that round.

Frampton started looking really tired by the 8th. His punches had nothing on them, and he appeared to be wilting. However, Frampton was able to will himself to capture the 10 and 12th rounds on my scorecard. Quigg looked good in the 8th and 9th. I thought he was on his way to sweeping the final five rounds of the fight, but Frampton showed a lot of heart in the last three rounds to get the victory. It was a real gutsy performance down the stretch from Frampton. But most of all, it was just plain intelligence showing through for Frampton. He just looked like the smarter guy in the ring. Quigg was all brawn but no brain in the this fight, and it cost him. I think Quigg could have won if he had a great trainer telling him what to do with his brawn, but he didn’t have that. His trainer didn’t have Quigg ready.

Frampton and Quigg plan on staying at super bantamweight. I can understand that move, especially with Frampton, because he doesn’t have the size to fight at featherweight. We saw that tonight. Frampton was barely big enough to defeat Quigg. I’d like to see one of these guys face Rigondeaux so that they can at least test themselves. If they both go back to fighting just the regular contenders, then they’re not going to help themselves increase their popularity. The only way they can become more popular is to face the best fighter in the division, and that’s clearly Rigondeaux.

Quigg needed someone to slap some sense into him in the first six rounds because he looked like he was frozen in the way that a person freezes up when they’ve got a bad case of the nerves. I think the moment was too much for Quigg, and he was blowing it because of his nerves. His trainer should have worked him over between rounds by the 3rd, because the fight was already getting out of hand. It was just like I thought it would be. Quigg was wasting time trying to box Frampton by throwing one punch at a time instead of just lowering his head and looking to overwhelm him with punches. That’s the only way a limited fighter like Quigg could have beaten Frampton, and I’m surprised that Quigg wasn’t using that game plan. If I was Quigg’s trainer, I would have realized what it took to beat Frampton and I would have him totally ready to use that plan. If I were Quigg, I would dump my trainer on the spot tonight and look to find a good trainer that could help me beat guys like Frampton. Quigg had the power and the size to win, but just a horrendous game plan. I blame the trainer for that.