Gennady Golovkin vs. Dominic Wade agreed to for April 23 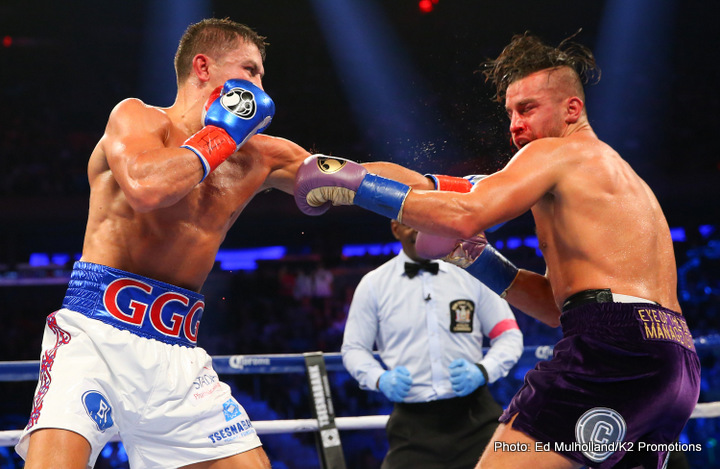 By Dan Ambrose: IBF/IBO/WBA middleweight champion Gennady Golovkin’s next fight against #3 IBF, #7 WBC, #8 WBA, #15 WBO Dominic Wade (18-0, 12 KOs) has been agreed to and also approved by HBO for April 23, according to Dan Rafael. The Golovkin-Wade fight will likely be staged at The Forum in Inglewood, California.

It’s obviously not a fight that Golovkin and his promoters at K2 wanted. They were hoping to get a bigger fight against the likes of Chris Eubank Jr. or Billy Joe Saunders. However, the International Boxing Federation took their ability to choose away when they ordered Golovkin to face Wade, the replacement mandatory challenger.

The previously IBF mandatory Tureano Johnson suffered a shoulder injury and couldn’t take the fight with Golovkin. Even with the IBF wanting Golovkin to face his mandatory challenger, there was still a chance that he could temporarily bypass the fight if he could get a unification bout against WBO middleweight champion Saunders, but unfortunately that fight couldn’t get made.

I'm told that Golovkin-Wade is agreed to and approved by HBO. April 23, likely at the Forum in LA. #boxing

Wade, 25, is unbeaten and coming off of a narrow 10 round split decision win over Sam Soliman last year in June 2016. Wade showed quick hands in that fight, and a tendency to retreat each time Soliman would come forward looking to land his shots. For the most part, Wade landed jabs. He was missing a lot with his right hand and falling into a clinch. I thought Wade lost the fight due to all the shots that Soliman was able to land.

Golovkin might have a difficult time trying to KO Wade because he’s very defensive and he likes back up when his opponents come at him. Wade does cover up after he retreats, and that might be the only chance that Golovkin has to try and knock him out.

Golovkin will need to get his punches off quickly when he does get into punching range, because Wade tends to tie up his opponents frequently. If you look at his fight against Soliman, Wade was tying him up all night long to keep him from getting his shots off. You would have to expect that Wade will do even more clinching against a big puncher like Golovkin if he’s allowed to get away with it by the referee.

Golovkin needs to beat Wade to get in position for a fight against WBC middleweight champion Saul “Canelo” Alvarez for later this year. Canelo needs to get past his May 7 opponent Amir Khan, and he also needs to decide whether he wants to face Golovkin or not. By now, Canelo and his promoters at Golden Boy likely have already made their mind of whether they’re going to take the fight with Golovkin or not.

“The Golovkin fight is going to happen, believe me,” Canelo’s promoter Oscar De La Hoya said to espn.com. “We are even looking forward to it.”

« Danny Garcia: Is He an Elite Welterweight?