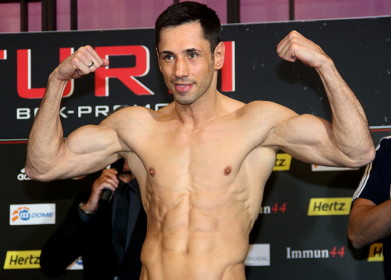 Sturm was beaten by Chudinov by a 12 round split decision last year in May. However, Sturm appealed the decision to the World Boxing Association and has been given a rematch.

Sturm will need to be a lot more active in the rematch if he wants to beat the 28-year-old Chudinov because he was badly outworked in the fight. There was nothing controversial about the decision. Chudinov clearly did more than Sturm and was the busier fighter.

Sturm doesn’t look like the same fighter that he once was at middleweight. He always a fighter with a lot of flaws who fans didn’t see as being in the same class the champions that held titles at the same time as him in the 160lb division. Sturm was viewed as the weak link compared to guys like Kelly Pavlik, Jermain Taylor and Arthur Abraham.

Sturm didn’t help himself in that he never faced any real high quality middleweights during his long reign as the WBA middleweight champion. Sturm held the title from 2007 to 2012, but he faced opposition that was for the most part mediocre. The fact that Sturm didn’t look to fight the dangerous guys in the division like Pavlik and many of the top contenders obviously hurt Sturm’s standing in the eyes of a lot of fans. Sturm appeared to lose at three times in his long reign as the WBA champion. He was given controversial draws against Martin Murray and Randy Griffin to retain his WBA title. Sturm also had a controversial 12 round decision over Matthew Macklin. All of those fights took place in Germany.

Here are the fighters that Sturm defended his WBA title against over a five-year period from 2007 to 2012:

Chudinov didn’t look good in successfully defending his WBA 168lb title last September in beating fringe contender Frank Buglioni by a 12 round unanimous decision. Chudinov was shaken up late in the fight by Buglioni on more than one occasion. However, in the 12th, Chudinov had Buglioni in trouble with some nice shots of his own.

Chudinov is Sturm’s best chance of winning a world title at 168. Sturm arguably doesn’t have the size, youth or the work rate to defeat the other champions James DeGale, Badou Jack and Arthur Abraham. Those guys hit too hard and they throw a lot of punches. Sturm mostly throws jabs nowadays, and he’s not going to beat the top guys just jabbing and throwing occasional power shots.

Chudinov is kind of the weak link among the super middleweight champions. Sturm could very well beat him, which wouldn’t be saying much. If Sturm does defeat Chudinov, then we could see Sturm face Abraham in a unification fight for his WBO title or WBA “regular” super middleweight champion Giovanni De Carolis, who recently defeated Vincent Feigenbutz by an 11th round knockout last January to win the WBA title.

Deontay Wilder vs. Alexander Povetkin possible for May 21 »