Chudinov disagrees with decision in loss to Sturm 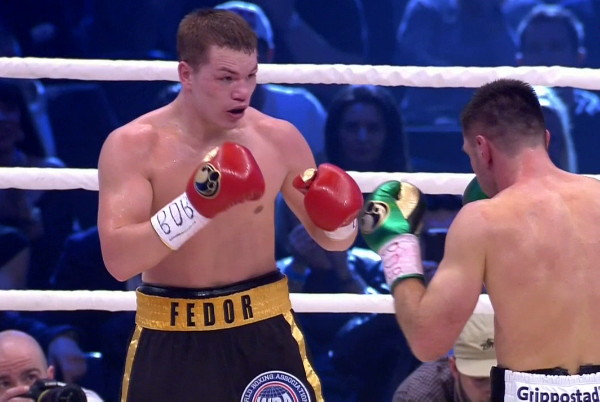 By Scott Gilfoid: After landing over 100 more punches than Felix Sturm (40-5-3, 18 KOs) and still find himself on the losing end of a controversial 12 round majority decision, Fedor Chudinov (14-1, 10 KOs) is not surprisingly unhappy with losing his WBA Super World super middleweight title to the German based Sturm at the Koenig Pilsener Arena, in Germany.

Chudinov connected on 297 of 1022 punches compared to Sturm’s 184 of 605 punches thrown, according to Fight News. While you can make an argument that Sturm landed the cleaner shots in many rounds, it still doesn’t take away from the fact that Chudinov was outworking and out-landing him in virtually every round of the fight. Chudinov’s punches weren’t the weak variety. They may have been lacking the hand speed that Sturm had, but Chudinov was still throwing with good punching power.

“There were a few clashes of our heads. Sometimes it was his fault, sometimes mine, but I don’t agree with the decision,” Chudinov said via fightnews.com.

Chudinov also had a big advantage in landing power shots. He landed 226 of 698 compared to Sturm’s 143 of 349. Chudinov landed 83 more power shots in the fight. That doesn’t necessarily mean that he should have won the fight based on just the punch stats, but when you watch the fight, it seems pretty clear that Chudinov did the better work in at least nine of the twelve rounds.

I gave Sturm rounds 1, 2 & 12. That’s all I could give Sturm because he looked tired in rounds 3 to 11. Sturm looked like he had gassed out in the same way that he did in his two fights against Sam Soliman. If you watched those fights, Sturm looked good in the first two rounds and then immediately gassed and was outworked by the busier Soliman.

Chudinov hasn’t said anything about whether he’ll protest the decision to the World Boxing Association, but that would certainly be a logical move for him to take. Sturm appealed his decision loss to Chudinov last May and the WBA gave Sturm a rematch, even though you would be hard-pressed to say that he deserved a second chance if you watched the fight. I hate to say it though; I can’t see the WBA giving Chudinov a rematch.

I think the WBA is going to let the decision stand, and Chudinov will just have to live with it. He’ll likely need to work his way back to a No.1 position with the WBA before he eventually gets another world title shot. In the meantime, Sturm will either retire or possibly look to fight WBO 168lb champion Arthur Abraham in a unification fight. I do not see Sturm giving Chudinov another fight. I hope I’m wrong, but I don’t think Sturm is going to let Chudinov have another fight. Even if the WBA ordered the rematch, I think Sturm is moving on in one manner or another.

If you look at this in a positive light; Sturm vs. Abraham is a good fight for the sport of boxing. It’ll generate a lot of money and many fans will be interested in it.

Some fans believe that Sturm deserved to win a questionable decision because he was arguably robbed in his 12 round decision loss to Oscar De La Hoya in 2004. However, Sturm has had questionable decisions go in his favor since then in fights against Javier Castillejo in 2007, Randy Griffin in October 2007, Martin Murray and Matthew Macklin in 2011, and Robert Stieglitz in 2014.

Those are five fights that I thought Sturm lost, and was either given wins or draws in those fights. As such, Sturm has lucked out when it’s come to questionable decisions more than he’s been robbed. I thought Sturm deserved the decision against De La Hoya in 2004. I thought that was a total robbery. De La Hoya needed a win so that he could fight an important mega-fight against Bernard Hopkins in his next fight, and somehow the judges gave De La Hoya the decision. De La Hoya’s questionable decision over Sturm was very timely, because it came when he badly needed the win to setup a big money fight against Hopkins in September 2004, which De La Hoya lost by a 9th round knockout.

I think Sturm’s record should be 38-10 rather than 40-5-3, because I think he clearly lost to Murray, Macklin, Griffin, Stieglitz and Castillejo. I also had Sturm losing to Griffin in their rematch. I thought that was a robbery too, but not quite as bad as the draw that Sturm received in his first fight with Griffin in October 2007.

« Thurman: Khan should watch film on Mayweather-Canelo for preparation