Frampton: Quigg will have to take risks tonight 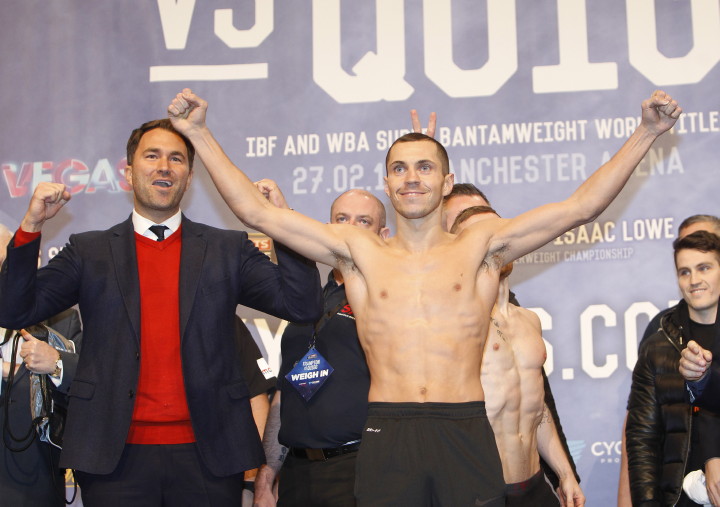 (Photo credit: Matchroom Boxing) By Scott Gilfoid: The way IBF super bantamweight champion Carl Frampton (21-0, 14 KOs) sees it, WBA 122lb belt holder Scott Quigg (31-0-2, 23 KOs) will have to take risks tonight in their unification fight if he wants a chance to win. Once Quigg starts taking risks, Frampton plans on knocking him out with something.

Frampton says that Quigg won’t be able to fight on his back foot because he’ll get out-boxed and find himself quickly falling behind in the fight. That’s why he’ll have no choice but to revert to form and come after Frampton in order to try and keep from being totally shutout in the fight.

Where to watch: Frampton-Quigg will be televised on Sky Box Office pay-per-view in the UK and on Showtime Boxing in the United States. 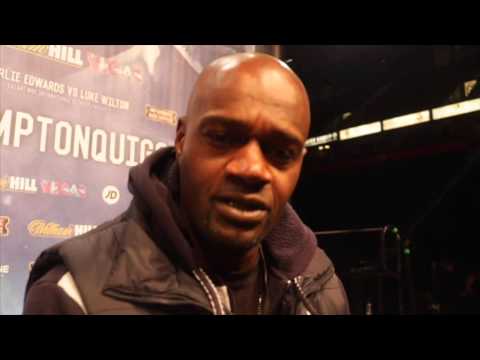 I totally agree with Frampton. Quigg has been a slugger his entire career, and he doesn’t know how to box and fight defensively. If he tries to play it safe by trying to box, which is totally out of character for him, then he’s quickly going to fall behind in the fight and need to do something drastic to get back into the fight. Quigg will need to come up with some kind of strategy because his usual style of fighting is going to get him knocked out. He’s too predictable, too easy to hit, and too basic with his fighting style.

Quigg’s boxing skills are limited at best. He’s always been a straight ahead slugger in his fights, and I can’t see him being able to change that going up against an A-level fighter like Frampton. It’s like totally alien to Quigg to change his fighting style at this point in his career. He can’t do it, and if he tries to do it, he’s going to be a miserable failure. 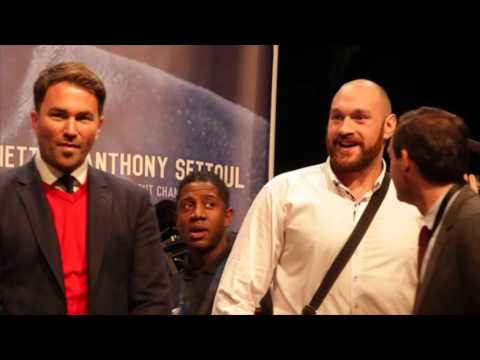 You can blame Quigg’s slugging habits on the soft match-making that’s been done for him by his promoter Eddie Hearn. If he had started matching Quigg with talented super bantamweights earlier in his career, then he would have been forced to develop his boxing skills in order to win fights. But instead of doing that, Hearn has continued to drag out soft jobs for Quigg to mow down left and right in record-padding contests. As such, here Quigg is in his ninth year as a pro and he can’t box to save his life.

What this means is that when Quigg gets inside the ring tonight with Frampton, he’s going to have no other choice but to slug with him if he doesn’t want to get totally clowned for 12 straight rounds in losing every round of the fight. Yeah, it’s possible that Quigg might get a mercy round here and there from the judges, but for the most part, I see a full clowning going on with Quigg getting totally ruled by Frampton.

I see this fight going really badly for Quigg. He’s in over his head, I hate to say it. We’re talking about a fighter with B-level boxing skills facing a guy that is arguably the second best boxer in the 122lb division behind Guillermo Rigondeaux. Frampton is just too good for a limited slugger like Quigg if you ask me. I think it’s going to be obvious from the first round that Quigg is out of his league in this fight. I just hope he doesn’t lose it and start fouling or something when things get bad. I’ve seen that kind of stuff before. A fighter get totally outclassed and then they start fouling in order to ugly up the fight and have some kind of excuse for why they lost. Some fighters suffer mysterious injuries that cause them to be bailed out of a fight they’re getting dominated in. I would like to think that Quigg won’t suffer some kind of injury out of the blue, or revert to fouling when things get totally out of hand early on.

“Whatever he comes out to do, I am going to have an answer for, but one million per cent I will knock him out,” said Quigg to skysports.com.

I don’t think so, Quigg. Whatever Frampton does, you’re going to be lost and unable to find your way. If you try to slug, Frampton is going to box and counter, and make you look bad. If you try and box Frampton, he’s really going to school you because you’re not a skilled boxer in my opinion. You’re just a pure slugger that doesn’t have a Plan-B. Believe me, you’re going to need a Plan-B, C, D, E and F tonight. Unfortunately, I don’t see you having a clue. I think you’re going to get whipped and made to look really bad out there. It might be a good idea for you to just go for broke in the first couple of rounds to try and shoot for an early KO, because that’s pretty much the only thing I see you’ve got going for you, Quigg.

Other fights on the card tonight:

Side note: I can’t say I’m too impressed with the undercard. It looks like a skeleton crew that Hearn has put together if you ask me. I mean, where in the heck is the quality? This is supposed to be a pay-per-view card on Sky Box Office, so where it the backup quality? Boxing fans are paying for this card. They should at least be three fights on the card that have recognizable minor stars. From what I can see, Hearn just put one good fight on the card in the main event between Frampton and Quigg, and left the rest of the card barren of talent. It kind of reminds me of the Floyd Mayweather Jr. vs. Manny Pacquiao fight card last May. The main event was a good one, but the undercard was just dreadfully lacking in quality fights. Everything had the look of like it had been done on the cheap, which it shouldn’t have been given the huge amount of money the paying fans were being charged to see the fight card. A lot of fans walked away from that experienced jaded, seeing it as a money grab on the promoter’s part. I would hate to think that Hearn is doing the same with the Frampton-Quigg card.

« Crawford vs. Lundy this Saturday night