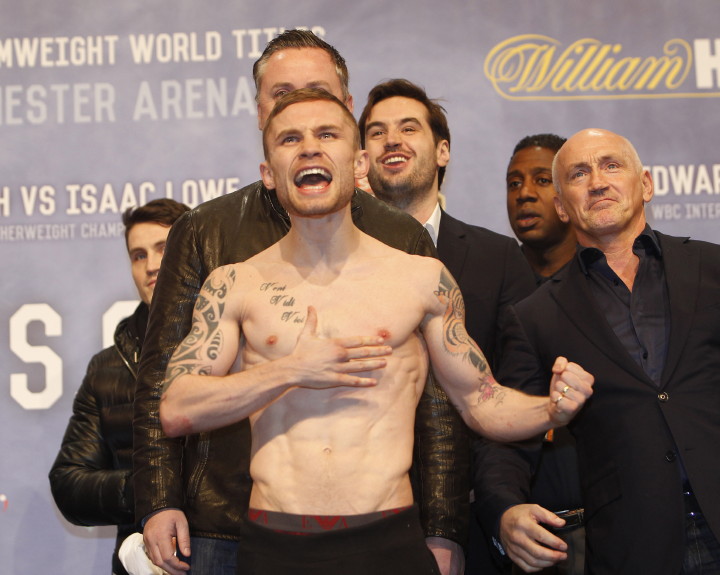 By Andy Hayes: The long awaited super bantamweight showdown between Carl Frampton and Scott Quigg is just hours away, and although this fight may not be the hottest ticket around the rest of Europe or across the pond, rest assured this is Britain’s biggest grudge match since Carl Froch v George Groves. This matchup has been a good few years in the making, and finally we will get to see all the answers to all questions haunting these men since they both reached championship heights.

Interestingly both men have divided opinion straight down the middle, leaving fans batting back and fourth with who they believe will come out on top. ‘Quigg is the better all round Boxer’, ‘yes but Frampton has the knock out power’. These are the type of things you have undoubtedly had to listen to since this fight was first announced. I believe both statements carry truth and could eventually decide the outcome of this unification bout. Scott Quigg the local man proved in his last outing that he has everything it takes to turn up the heat when necessary , forcing the referee to step in and stop further damage to veteran Kiko Martinez. A man Frampton struggled to dispatch in the same fashion. Many fans believe this is the best measure for both men. Frampton has however got through contests with Avalos and Gonzalez Jr, albeit with knockdowns.

Quigg will come in the bigger man, only slightly due to the 10lb weight gain limit, but he is naturally bigger and will surely carry the weight better. With this in mind I do think the Irish man will not be phased by this and will distribute as much punching power regardless. Another key factor remains general in ring prowess and experience, something Frampton has been very vocal about, telling Quigg that it will be his ‘Boxing brain’ that will let him down. I don’t believe this for one second, but again both men have proved they have Boxing ability in abundance and when deeper into the fight something that will become increasingly clearer.

Fanbase initially played a large factor in this contest, with most people believing the Irish man will bring across his ever growing home crowd and having them out do the noise brought by the local fans from Manchester. (Don’t forget Irish blood runs deep in to the Mancunian people as well). However the weigh in proved that things seem pretty even, with Frampton receiving his first taste of boos and jeers by the arousing local fan boys.

There are other things to consider when soaking up the build up to this fight. From Shane Mcguigan’s verbal onslaught of Ring magazines number one trainer Joe Gallagher. To Eddie Hearn’s need to prove his decision to bring Quigg into the Match room stable, was just as justified as letting Frampton go. Barry Mcguigan has also started the mind games, by voicing opinions over the dressing rooms. 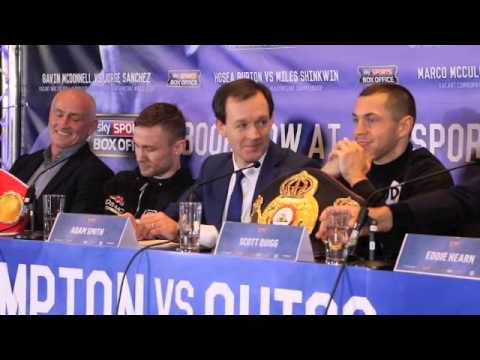 Everything factors in to making this one of the most eagerly awaiting bouts in recent history and just the third British world title unification fight in 23 years. When weighing up all attributes and floors, I do feel Frampton will prevail. Let it be said this fight will not end early and will most probably hit the later rounds. I personally feel Frampton will sway judges over the full 12 rounds. I think he has a little more to offer in terms of fighting on both the front and back foot. His punching power is proven, and his experience from an incredible amateur career to date, should be enough to keep Quigg at distance allowing him to score marks from the judges. I further know there will be moments when Frampton steps in and tries to land that KO punch, however I think he has enough respect for Quigg’s ability to not get caught up in those exchanges. Whatever the outcome, I can not wait to finally find out who takes away the IBF and WBA Super Bantamweight belts, and finally give fans the answer they have been asking for so long

« Frampton: Quigg will have to take risks tonight

Hughie Fury’s next fight could be announced on Tuesday »