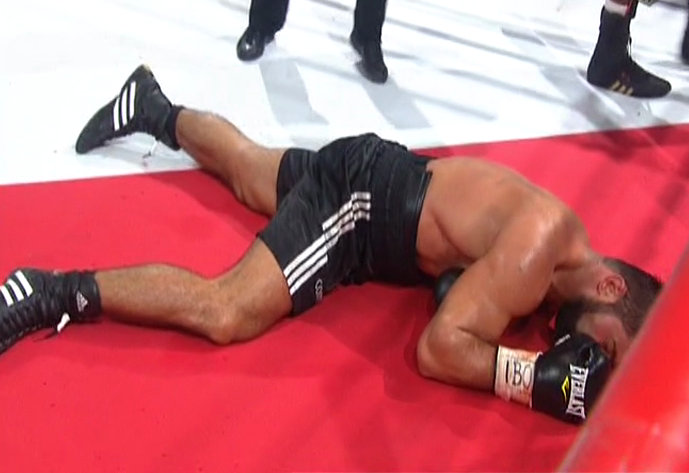 By Allan Fox: #10 IBF Ola Afolabi (22-4-4, 11 KOs) weathered an early storm of hard head shots to come back and score a 5th round knockout win over #3 WBC, #4 IBF Rakhim Chakhkiev (24-2, 18 KOs) to win the IBO cruiserweight title on Wednesday night at the Basket-Hall Arena, in Kazan, Russia.

Afolabi, 35, hurt Chakhkiev with a right hand to the head in the 5th. Afolabi then followed it up with a big left hook to the head that put the 2008 Russian Olympic gold medalist down face first on the canvas. The fight was then halted by the referee at 2:44 of the 5th when it became clear that Chakhkiev wasn’t going to get up from the knockdown.

Chakhkiev looked great early on in punishing Afolabi with tremendous left hands to the head and right hooks. It was a tactical plan used by Chakhkiev to try and take the Nigerian Afolabi out quickly, but it proved to be a failed plan. Afolabi took the huge shots from Chakhkiev in his early onslaught and then came on after the Russian fighter tired out after three rounds. Afolabi didn’t unload with his heavy artillery in the 4th after Chakhkiev had tired, but he clearly dominated the round with his nice jabs to the head. Chakhkiev didn’t even attempt to get any offense going, as he had nothing left in the tank by that point in the fight.

Chakhkiev fought really well for the first round and a half, but by the second part of round 2, he looked like he had tired out. Afolabi took control in the last half of the 2nd to get the better of the Russian fighter.

In the 3rd round, Chakhkiev came storming out of the gate in landing a flurry of huge shots to the head. He got inside on Afolabi and landed four big rights to the head. Afolabi tried to take the fight to the outside, but Chakhkiev continued to stay in close and basically mug Afolabi. There was a clash of heads early in the round that left Afolabi with a cut over his left eye. The action was halted so that Afolabi’s cut eye could be examined by the ringside doctor. The cut was deemed not serious, and the action was allowed to resume. In the same round, Chakhkiev suffered a small nick on the side of his left eye. It wasn’t a serious cut through.

Afolabi boxed smart in the 4th round in staying on the outside, jabbing and keeping Chakhkiev from getting inside on him. Chakhkiev looked helpless on the outside and was unable to do much at all. He tried to get close enough to land his big shots, but Afolabi wisely circled the ring to keep him from closing the distance on him. Chakhkiev looked like he didn’t have the energy to do much though. He didn’t even really put much of an effort in closing the distance, as he was clearly too tired to pressure Afolabi like he’d done in the first three rounds.

The loss for Chakhkiev is his second knockout defeat in the last two years. He was stopped by Krzysztof Wlodarczyk in the 8th round two years ago in 2013 in a fight where Chakhkiev gassed out.