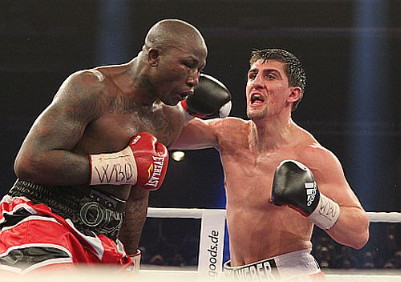 By Jim Dower: 36-year-old former world title challenger Ola Afolabi (22-5-4, 11 KOs) has reportedly retired from the sport as of his birthday on March 15.

Afolabi lost his last fight to former WBO cruiserweight Marco Huck by a 10th round knockout last February at the Gerry Weber Stadium in Halle, Germany. Afolabi’s left eye swelled up badly, and that was the reason why the fight was halted.

Afolabi wanted to get out of the sport while he still had his mental faculties in order.

“When you get old, the first things you lose are timing and reflexes. Although I tried my very best and worked really hard, I lost the fight,” he wrote, referring to his fourth meeting with Huck,” Afolabi said via ESPN.com.

Afolabi got a raw deal in his first three fights with Huck, because he appeared to win those fights. Instead, he was given two defeats and a draw. The money obviously was good for Afolabi in the three Huck fights, but it was disappointing that he was beaten in all of his fights against him.

At 36, Afolabi feels that he’s lost something from his game. He feels that his timing isn’t there, and he’s had a number of surgeries to repair eye and shoulder injuries. Afolabi twice had retina surgeries on his eyes. He’s also had shoulder surgeries. The injuries caused Afolabi to lose time in his career.

Afolabi probably could have continued to fight a little longer and would have done well against certain guys. However, the cruiserweight division has gotten better recently, and even guys like Huck don’t have a place. The new fighters are too good, and Afolabi likely would have had to be content with just being a contender. Huck will likely wind up on his way out of the sport before long as well once he starts facing the younger and stronger cruiserweights like Olesandr Usyk.

It’s too bad Afolabi lost his last fight against Huck, because it would have been a great way for him to out with a victory, especially with how controversial his three previous fights with Huck were.

« Dirrell brothers in action on April 29