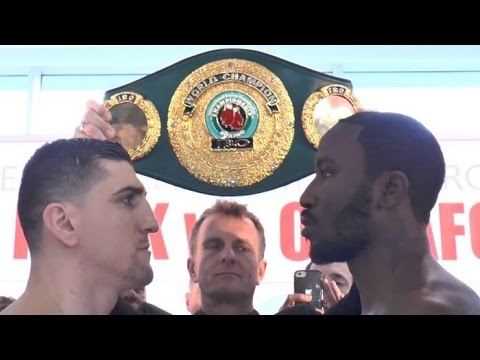 By Allan Fox: Former WBO cruiserweight champion Marco Huck (38-3-1, 26 KOs) made weight on Friday for his fight against Ola Afolbai (22-4-4, 11 KOs) this Saturday night on February 27 at the Gerry Weber Stadium in Halle, Germany.

Huck weighed in at 198.4lbs. The 35-year-old Afolabi came in at 200lbs at the cruiserweight limit.

Huck, 31, lost his WBO cruiserweight title last August in being stopped in the 10th round by Krzysztof Glowacki. Huck has been out of action ever since. It was a surprise loss for Huck because many boxing fans felt that he would win the fight.

Huck’s loss to Glowacki ended a six-year reign as the WBO cruiserweight champion. While Huck held onto the WBO title for a long period, he did not fight any real dangerous fighters other than Glowacki, Denis Lebedev, and Afolabi during all those years. Lebedev and Afolabi lost by highly questionable decisions to Huck in the past. Huck never fought many younger fighters like Olesandr Usyk.

This will be the fourth time that Afolabi and Huck have fought each other. Huck has won two of the fights with one of them being a draw. Many boxing fans felt that Afolabi deserved to win two of the three fights. Huck clearly won their last fight in 2013 in winning a 12 round decision. However, their first two fights in 2009 and 2012 were matches that could have easily gone in favor of Afolabi. All three of the fights took place in Huck’s adopted country of Germany. Afolabi lives in Los Angeles, California. He comes from the UK.

Huck is ranked #3 with the WBO, and he needs a win here to put himself in position to face Glowacki again. Usyk, #1 WBO, is in front of Huck in the rankings, and will likely face the winner of the April 16 fight between Glowacki and Steve Cunningham. Huck vs. Usyk would be a great fight, but it’s doubtful Huck would take on such a dangerous opponent like that. He can get another title shot simply by waiting.

Afolabi is going to need to really put in a big effort on Saturday if he doesn’t want to find himself on the short end of the stick yet again. He’s fighting in Huck’s home country and it won’t be easy with the crowd in Huck’s favor.