Sturm vs. Abraham must happen in 2015, says Sauerland 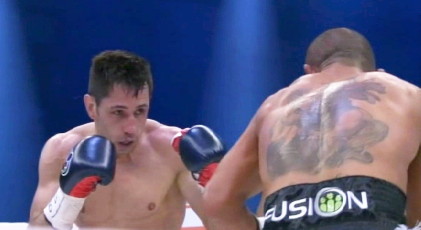 Sauerland thinks the fight is already late in taking place, and Sturm waits until 2016 before finally taking the fight, it will be too late.

As it is, Sturm, 36, has lost two out of his last three fights in the past year in defeats to Sam Soliman and Fedor Chudinov. He gave Chudinov some problems some problems last May before losing by a 12 round split decision in a close fight. Before that, Sturm fought to a 12 round draw against former WBO 168lb champion Robert Stieglitz last November in Germany.

Sturm didn’t fight badly in either of his last two fights, but the problem he didn’t fight well enough to get the victory. Sturm’s last win was two years ago in 2013, when he beat IBF World middleweight champion Darren Barker by a 2nd round stoppage. Barker had a hip problem, and it’s unclear what would have happened in that fight if Barker had been 100% healthy.

“The fight must happen this year, because after that, Arthur Abraham has other commitments,” Sauerland said via Bild am Sonntag. “He has a mandatory defense and that takes precedence. It’s already late for the fight between Abraham and Sturm – but not too late. If it doesn’t take place in 2015, then it probably never will.”

Sturm is ranked #4 by the WBA, but he’s not ranked currently in the top 15 by the World Boxing Organization. The WBO might not sanction a fight between Sturm and Abraham even if the fight could be made. It’s possible that the fight could still take place as a non-title fight, but I’m not sure what the WBO would do in that case.

Would they strip Abraham for not taking a non-title fight or would they let him go through with it the way former WBC light welterweight champion Danny Garcia fought back to back non-title fights against Rod Salka and Lamont Peterson? The WBC stripped Garcia after the Peterson fight.

“Come on already Sturm Boxing – now or never!” Abraham said on his Twitter.

It would seem late in the game already for an Abraham-Sturm fight. Sturm is ranked in the top 5 by the WBA at 168, but he’s done little to deserve that ranking. I don’t think this is a fight that should be made at this point even if it makes money. It would be better for the German boxing public to see Abraham fight relevant fighters who are doing well in the ring and in their prime rather than fighters who haven’t won in two years like Sturm.

Sauerland should be looking to match Abraham against Fedor Chudinov or Vincent Feigenbutz next. The fans have already seen Abraham fight Stieglitz four times in just three years. They need some new blood like Chudinov and Feigenbutz to be mixed in to make it interesting.

« Mayweather’s not giving the fight the fans want, says Khan

Abner Mares vs. Leo Santa Cruz this Saturday on PBC on ESPN »