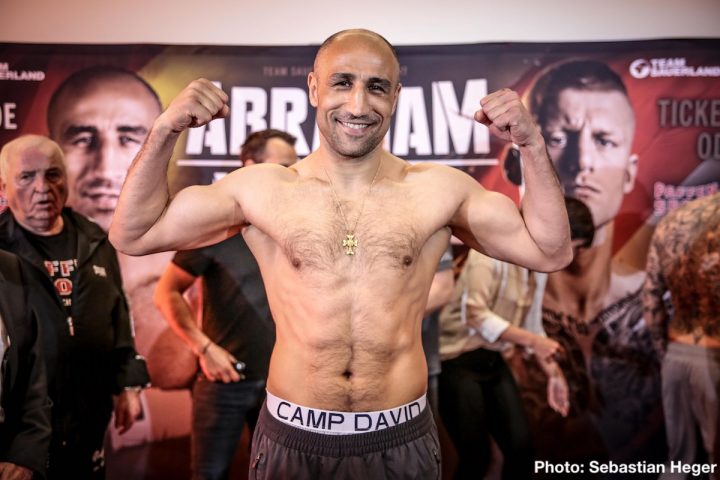 Abraham knocked Nielsen down in round 10. It was an important knockdown for Abraham, because he was being getting hit a lot by Nielsen and struggling with the youth of the Danish fighter.

The loss for Denmark’s Nielsen was his second in a row. He was beaten by John Ryder by a 5th round knockout last October in his previous fight.

The heavy-handed Abraham pressured Nielsen throughout, taking the fight to him and hammering him with heavy shots each time he was able to trap him. Nielsen did a good job of bouncing around the ring, and hitting Abraham with smart jabs and 1-2 combinations. Nielsen lacked the punching power to keep Abraham off of him for any length of time.

For Abraham, it was his first fight since losing to IBO super middleweight champion Chris Eubank Junior by a 12 round unanimous decision last year in July. Abraham looked terrible in that fight against Eubank Jr. Tonight, Abraham didn’t look much better. The only difference was is his opponent Nielsen wasn’t good enough to take advantage of Abraham’s advanced age and deterioration.

Abraham had been out of the ring for 9 months since his 12 round unanimous decision loss to Chris Eubank Jr. last July. Tonight’s fight showed that Abraham’s skills haven’t gotten any better since then. This should have been an easy win for Abraham if he was still in his prime, but it turned out to be a really tough match.

Abraham is currently ranked No.12 with the World Boxing Organization at super middleweight. However, I don’t think he’s got enough left in the tank to have any chance of beating WBO 168 lb. champion Gilberto ‘Zurdo’ Ramirez in a rematch or beat any of the other champions James DeGale, George Groves, Tyron Zeuge or David Benavidez. Abraham lost to Ramirez by a lopsided 12 round unanimous decision two years ago in April 2016. Since then, Abraham has beaten Tim Robin Lihaug, Robin Krasniqi and Nielsen. Abraham lost to Eubank Jr. a year ago by a 12 round unanimous decision.

Abraham’s 15-year pro career is still alive but just barely. He needs to try and fight former middleweight champion Felix Sturm while he still can. Sturm hasn’t fought in 2 years since his 12 round decision win over Fedor Chudinov in their rematch in February 2016.

In other boxing results on the card, super middleweight Nieky Holzken (14-1, 11 KOs) got back to his winning ways with a 3rd round TKO victory over journeyman Bernard Donfack (23-19-4, 11 KOs). Holzken was coming off of a 12 round decision loss to Callum Smith last February. In tonight’s fight, Holzken knocked Donfack down in the third round. The fight was then halted by Donfack’s corner after they tossed in the towel.