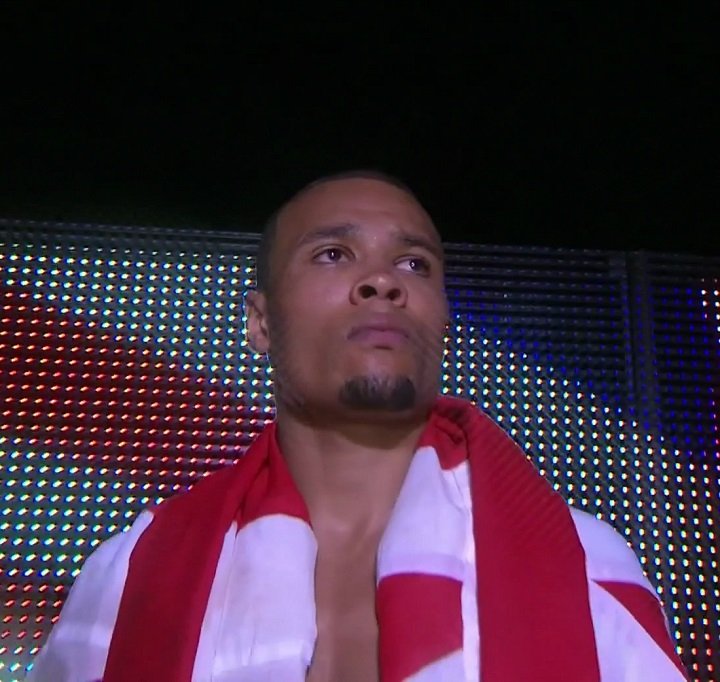 By Scott Gilfoid: With a big bout against WBA super middleweight champion George Groves (26-3, 19 KOs) just over the horizon, Chris Eubank Jr. (25-1, 19 KOs) earned a spot in the World Boxing Super Series tournament on Saturday night in defeating past his prime for 2 division world champion Arthur Abraham 46-6, 30 KOs) by a 12 round unanimous decision at the SSE Wembley Arena in London, England.

Eubank Jr. was in the mood to brag about his performance after the fight, saying he was never hit by the 37-year-old Abraham and that he had beaten him in a more convincing fashion than anyone else had during his career. Eubank Jr. seems to be a little in the dark about the history of Abraham. If Eubank Jr. had done his homework, he’d realize that these fighters all beat Abraham in a far more convincing manner than he did: Carl Froch, Andre Ward, Gilberto Ramirez and Robert Stieglitz. You can give Eubank Jr. a pass for being ignorant of the history of Abraham, as he might not have ever seen any of those fights. Stieglitz stopped Abraham in the 4th round in 2013. To me, that’s more convincing than Eubank Jr’s 12 round decision win over Abraham last Saturday night. I mean, which would you rather have a knockout or a decision win over Abraham?

Eubank Jr. says he wants to fight Groves more than anyone of the 8 super middleweight participants in the World Boxing Super Series (WBSS). Eubank Jr. wants to fight Groves because he has the WBA 168lb title in his possession, and he feels it would be a bigger fight than the other guys. However, Eubank Jr. selected an arguably weak opponent in his first fight in the tournament in Avni Yildirim (16-0, 10 Kos) for his first fight in the tournament in September. That’s the guy that Eubank Jr. handpicked, because he sees him as being similar to Arthur Abraham in fighting style. He also believes that Yildirim will make for a more exciting fight for the boxing fans. Having seen a number of Yildirim’s fights, I think he’s a big step down from Abraham.

Yildirim is not in the same class as Abraham. Yildirim has looked very, very average in wins over Marco Antonio Periban and Aaron Pryor Jr. I’m not sure why the WBSS has added Yildirim to the tourney. Out of all the contenders in the super middleweight division, there are arguably far more talented fighters than this guy. Matt Karobov would have been a better option, as would David Benavidez, Andre Dirrell and Anthony Dirrell.

“It has to. We will both be in the ring in the next 5 to 6 months,” said Eubank Jr. about George Groves at the post-fight press conference last Saturday night. “We both have fights around September time. I’m going to win mine and if he wins his, then we’ll meet next year. George Groves knows what I have. He knows what’s happened in the past. He might play down the fact that he’s worried or that Callum Smith is the bigger test. Groves, he’s the one with the title. He’s the only guy I’m looking at and care about. He has the best, so he’s probably going to fight the hardest,” said Eubank Jr.

Groves is going to be a real problem for Eubank Jr. to deal with, as will Callum Smith and Juergen Braehmer. Those guys have punching power, unlike Eubank Jr. They don’t need to stand in front of their opponents and hit them with repeated uppercuts for many rounds before they can get their opponents out of there. All three of them are quite capable of ending a fight within 4 rounds. What I got from watching Eubank Jr. beat Abraham last Saturday night is the fact that he’s just not a puncher. Eubank Jr is strictly a volume puncher, who lives and dies by his ability to throw a lot of shots.

It’s good to be able to throw a massive amount of shots like Eubank Jr., but it also means that he needs to take a lot of shots for him to win. Eubank Jr. says he didn’t get hit last night by Abraham. I disagree. I saw Eubank Jr. get hit a lot by some heavy shots, and that was with Abraham rarely throwing punches. The reason why Abraham didn’t let his hands go is because of 2 reasons: A. Abraham has terrible stamina and can’t fight hard for more than 20 to 30 seconds of every 3 minute round. B. Abraham is not a counter puncher. What he does instead is he waits for his opponents to stop throwing punches before he gets hit shots in. Abraham waits for his opponents. That’s a stupid way to fight. That’s why Robert Stieglitz was able to stop Abraham in the 4th round in their fight in 2013. Stieglitz saw that Abraham is the type that just covers up and waits on his opponents to stop throwing shots before he opens up with his own. Stieglitz took advantage of that flaw in Abraham’s game by attacking him with nonstop punches for 4 rounds. It was a gamble on Stieglitz’s part. He gambled that he would get the knockout of Abraham before he gassed out. Eubank Jr’s volume punching style was perfect to beat a fighter that waits like Abraham. That style won’t work against a fighter like Callum Smith or Groves, because they don’t wait for their opponents to stop throwing shots before they nail them. Both of them have far better punching power than Eubank Jr. There’s no comparison. Eubank Jr. has punching power that is more like what you would see from a welterweight or a junior middleweight with moderate power. I rate some of the junior middleweights as having better power than Eubank Jr. That’s not a knock on Eubank Jr. It what it is. Some guys just aren’t blessed with punching power.

“I chose him. I told my father,” said Eubank Jr. about him wanting to fight little known Avni Yildrim (16-0, 10 KOs) in his first fight in the World Boxing Super Series in September rather than one of the more dangerous fighters. “It’s the fight that will make the most entertaining out of the names that I was given. I told my father to pick him, and he has a similar style to Abraham,” said Eubank Jr.

I think Eubank Jr. is being disingenuous in saying that he chose Yildrim due to him being the most entertaining. Braehmer, Callum Smith and Groves would be far more entertaining than Yildrim, who has very slow hand speed. Yildrim makes Abraham look fast of hand in comparison. The guy’s punches are glacially slow. To be honest, the Super 8 tournament has a lot of weak fighters competing. I don’t rate Yildrim, Rob Brant, Jamie Cox and Erik Skoglund. I don’t see those guys as being talented super middleweights. Braehmer fights at 175, and he’s pretty old now at 38-years-old. Braehmer will be turning 39 in October. In his last fight, Braehmer was stopped by Nathan Cleverly last year in October. By the time Braehmer sees action in the World Boxing Super Series, he’ll have been out of the ring for 11 months. I mean, come on. The WBSS has a lot of soft opposition in the 8-man tourney at super middleweight. The only guys that have any kind of talent is Groves, Smith and Eubank Jr. The other 5 guys are just filler in my opinion. It’s not much of a tournament as far as the super middleweights go. The cruiserweight tourney is much more interesting, as that portion of the tournament is filled with talented fighters from top to bottom.

“The punches he did catch me with, they were more glancing blows,” said Eubank Jr. about the shots he was taking from Abraham. “Uppercuts, inside fighting, I got to show everything. I got to show my inside work. I got to show my boxing skills. I got to showcase who I am and what I can do. This is the first time in my career that I’ve taken my foot off the gas towards the end of a fight. That’s because I knew I had the Super 8 tournament coming up. I dominated he guy. I knew he can be a dirty fighter at times. It’s not worth it me being cut or me getting injured, something that might hinder my performance in my next fight. Let me just win. I’ve never done that before. It didn’t feel great. It was the smart thing to do because I had the Super 8 tournament. He was badly hurt on more than one occasion. I can understand why he’s never been knocked out in his career. He’s a tough dude. A lot of guys would have cracked under the pressure. He did not come here to lie down. I guess that’s why he’s had such a successful career. He’s had the mindset that he’s not going to give up. I was letting him know how pretty I was. Only the best fighters have beaten him. I think of all the people that beat him, I beat him the most convincing. I caused him the most issues. I made a statement. It’s plain to see that I am the real deal. I was in the ring with a guy at the elite level, and I made him look like an amateur. He didn’t hit me, nothing on my face. I said I was going to go out and make a statement, and that’s exactly what I did. Now a lot of people will be watching,” said Eubank Jr.

As I mentioned previously, Eubank Jr. did not beat Abraham more convincing than Ramirez, Froch, Ward and Stieglitz did. I rate Eubank Jr’s win as far below the victories those fighters had over Abraham. That’s OK though, as those fighters had more punching power than Eubank Jr., and in the case of Ward, more hand speed and talent. You can’t compare what Eubank Jr. did against Abraham with those guys, as they had more physical skills to offer.

“I’m going into the Super 8 tournament,” said Eubank Jr. “There’s a lot of good fighters in the tournament. The fight wasn’t tougher than I thought it would be. He was in terms of the punishment he took. I know with my work rate and my defense that’s how that fight would play out. The uppercut is definitely something I worked on for this guy. I knew he’d be open to it. I knew the uppercut would make it through,” said Eubank Jr.