Felix Sturm vs. Fedor Chudinov on May 9th in Frankfurt, Germany 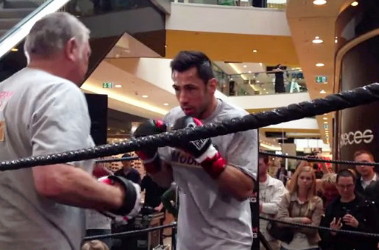 Sturm is looking to pick up a strap to get him ready for a title shot against WBO 168 pound champion Arthur Abraham in a German based fight possibly later this year.

Chudinov, 27, is nine years younger than the 36-year-old Sturm, and quite a bit stronger than him in terms of punching power. What Chudinov doesn’t have is hand speed. He’s very slow, just like his brother, middleweight Dmitry Chudinov, who recently was stopped in the 12th round by Chris Eubank Jr last Saturday night in London, UK.

The difference between the two brothers is that Fedor Chudinov is a bigger puncher a little heavier. Both are 5’9” though. Fedor is rated highly by a lot of boxing fans, and he’s got the kind of power that can potentially make Sturm miserable in this fight if he doesn’t choose to clinch him all night long like we saw with Eubank Jr last Saturday.

You can guess that Sturm will likely copy Eubank Jr’s game plan by clinching and wrestling Chudinov all night long in order to keep him from getting his shots off. Chudinov needs to watch out for the holding, and come up with a good game plan to defeat it.

It’s always nice when the referee actually does his job to limit the amount of holding, but you can’t assume anything going into a fight. For that reason, Chudinov is going to need to train to throw punches while being held 10+ times per round. If he can nail Sturm with shots while one of his arms are being held in an arm bar like we saw last Saturday with Eubank Jr holding Dmitriy Chudinov, then I think Fedor will be able to knock Sturm out.

“I promised to make only big fights from now on. Chudinov is seen as a highly talented and skilled Boxer with a lot of punching power. But i will take this belt to Germany,” Sturm said.

I wouldn’t call this a big fight. I mean, it’s a decent fight for Sturm, but hardly a big fight. Even if Sturm faces Abraham, I don’t consider that a big fight. A big fight to me is Sturm fighting Carl Froch, the Dirrell brothers, Andre Ward or Gennady Golovkin.

I’m not holding my breath waiting for any of those fights to happen. I see Sturm fighting Abraham, and if he can beat him to win his WBO title, Sturm will then sit on the belt like a goose, defending it against guys like Abraham in rematch after rematch, and Robert Stieglitz.

“We always wanted to make a fight in Frankfurt, but we could never ever imagine, that it would be such a big thing. Frankfurt is a city of boxing and we’re really enjoying the great interest and resonance by the fans,” said Sturm’s manager Roland Bebak.

Roach: Pacquiao will KO Mayweather in the later rounds »