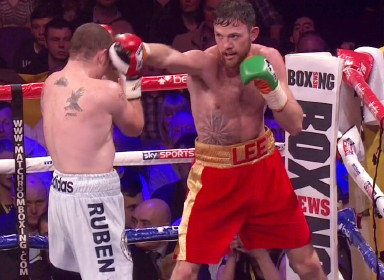 By Scott Gilfoid: After failing in his previous attempt to capture a world title in 2012, #4 WBO Andy Lee (33-2, 23 KOs) will be getting another chance to grab a strap this Saturday night in his bout against the hard-hitting Russian talent Matt Korobov (24-0, 14 KOs) in their clash at the Cosmopolitan of Las Vegas, in Las Vegas, Nevada, USA.

The vacant WBO middleweight title will be on the line in the fight, and this is easily the best chance that the 6’2” Lee has to try and win a world title.

If he can’t beat Korobov on Saturday night then it’s very likely that Lee will never be able to win a title, because he doesn’t match up well against the other middleweight champions Gennady Golovkin, Miguel Cotto, Daniel Jacobs and Jermain Taylor. Those guys would all likely knock Lee out after the 6th round or so.

Lee is going to need to keep out of the wheel house of the hard hitting Korobov if he wants to keep from getting knocked out. If Korobov is able to mix it up with Lee for any length of time he’ll wind up knocking him out.

This is an important fight for Lee, as he’s getting a second chance that many fighters never get. He was blown out by former WBC middleweight champion Julio Cesar Chavez Jr in the 7th round in their fight in 2012.

Lee failed to follow the advice of his then trainer Emanuel Steward, who wanted Lee to box Chavez Jr rather than slug with him. Hopefully for Lee’s sake he’s learned to control his brawling instincts by now, because if he comes out trying to slug with the powerful Korobov on Saturday night then this fight will wind up being a very, very short one with Lee getting knocked out.

“I relish this opportunity to fight for the WBO middleweight title. I have never been more ready to win the title,” Lee said via Dan Rafael of ESPN.com. “I am totally focused on the fight and I’m ready to take care of business on Saturday night. I have learned a lot over the years.”

You can make an argument that Lee has learned more in his training camps in sparring different guys than he has in his actual fights, because he really hasn’t been matched up with too many talented fighters during his eight years as a pro. I mean, the best guys that Lee has faced during his career is Brian Vera, John Jackson, Chavez Jr, Alex Bunema, and Craig McEwan. That’s a pretty thin bunch for an eight-year pro.

It’s unclear why Lee’s management has taken him so slowly during his career, because you’d like to have seen him facing much better opposition many years ago instead of the soft opponents he’s been continually fed one after another. I’m not sure if Lee’s poor opposition has stunted his talent level, but I’m sure it hasn’t helped him any.

“I’ve been in different fights and training camps and I’ve picked up a lot of experience along the way,” Lee said. “I’ve fought a lot of different guys with different styles, been in different situations, faced adversity, and I fought my way through. This is my time and my date with destiny.”

Lee is right about this being his time. If he can’t do it now then I don’t see how he’ll be able to do it in the future. It’s not as if he’s getting any younger.

« Khan thinks Roach is trying to block his Mayweather fight