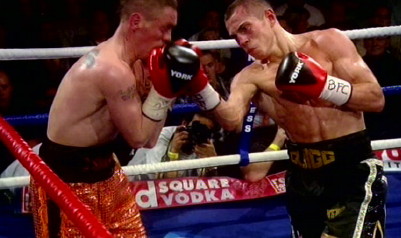 By Scott Gilfoid: This month #1 WBA, Scott Quigg (26-0-1, 19 KO’s) will be fighting #2 WBA, Yoandris Salinas (20-1-1, 13 KO’s) for the WBA World super bantamweight title on September 28th on the undercard of the Tyson Fury vs. David Haye fight at the Manchester Arena (formerly M.E.N Arena), in United Kingdom.

The Quigg-Salinas fight is a real toss up bout because both guys have faced nothing but weak opposition their entire careers, and neither of them are considered to be as talented as the top fighters in the division.

Quigg told Sky Sports “I know we’re up against a very good fighter; he’s had over 300 wins as an amateur but me and Joe are confident with what we’ve come with and he’ll have to worry about me as well on that night.”

Salinas does have a ton of experience at the amateur level, but he’s faced only one decent opponent since he turned pro in 2009. In 2011, Salinas was held to an 8 round draw against Nehomar Cermeno.

The fact that he couldn’t even beat Cermeno doesn’t bode well for his future. Salinas is probably good enough to beat Quigg, but given that the fight will be taking place in the UK, I don’t see Salinas winning the fight unless he knocks Quigg out.

The winner of the Quigg-Salinas fight will essentially be a paper champion because the World Boxing Association’s real world champion is Guillermo Rigondeaux, who holds the WBA Super World super bantamweight title.

The WBA is another sanctioning body that has multiple titles and it makes things incredibly confusing for casual boxing fans, because they got thrown off in hearing that a fighter is a world champion when in reality he’s like champion with designation of 1B or in this case 1D. If Quigg beats Salinas on September 28th, Quigg will still be considered well behind the other super bantamweight champions Rigondeaux, Leo Santa Cruz and Kiko Martinez.

I would like nothing better than to see Quigg fight one of those guys to see how he would do, but can you imagine what happen if Quigg was thrown in the ring with Rigondeaux or Santa Cruz or even Martinez. We’re talking a Jurassic Park like slaughter. Rigondeaux might not slaughter Quigg, but he would make him look silly for 12 rounds in a fight even more one-sided than Rigondeaux’s win over Nontio Donaire.

Santa Cruz would just knock Quigg out in a brutal fashion, and the same with Kiko Martinez. That’s why I hate the fact that there are so many champions in every weight class, because you get guys that shouldn’t be holding titles and it just confuses the boxing public.

Magic Johnson: Mayweather was so good against Canelo the fight was boring »