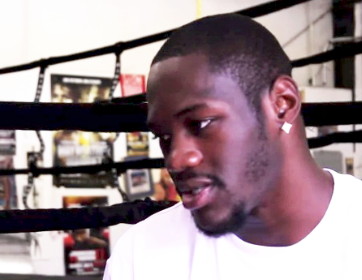 By Scott Gilfoid: Unbeaten British heavyweight Tyson Fury (21-0, 15 KO’s) says he wants to face unbeaten American contender Deontay Wilder (29-0, 29 KO’s) if Fury can get past David Haye (26-2, 24 KO’s) on September 28th in the UK. Fury’s promoter Mick Hennessy says that the 6’7″ Deontay is the one that Fury wants after Haye, and he’s eager to put that fight together.

Hennessy told I Film London “Tyson said once he knocks David Haye out, he’s going to take the best heavyweight who he considers in world boxing from the U.S [Deontay Wilder], and he’s going to take him on in a massive fight. That’s Tyson, he doesn’t swerve anyone, and Deontay, he wants the same.”

Deontay was present for the Hennessy interview, and he backed up everything that Hennessy said, saying that he really wants the fight as well.

If Cunningham had been able to continue to fight the way he did in the 2nd round, he would have been knocking Fury down left and right and the referee would have had to halt the fight because it would have become comical after awhile with Fury kissing the canvas so many times.

Deontay would totally destroy Fury if that fight were made. Can you imagine Fury getting hit by the 6’7″ Deontay’s huge right hands round after round. Deontay is a much bigger puncher than Cunningham is, and Fury would be in serious trouble just trying to make it out of the first round in that fight. Deontay would be nailing him with big power shots and it would next to impossible for Fury to go beyond 2 rounds.

I wonder if Hennessy is just name dropping Deontay’s name to get Fury some badly needed attention. It could be that he has no intention of ever letting Fury fight a powerhouse like Deontay. I mean, if Fury wouldn’t even fight David Price, then why should you think that Hennessy will let him fight Deontay. This is a move that also could be done to throw Haye off by making it look like Fury doesn’t see him as a real challenge and is looking past him already.