Huck taunts Eddie Chambers about his loss to Mchunu 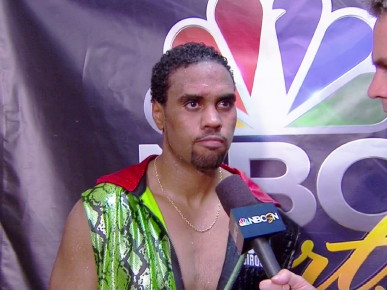 The 99-91 scores were a lot more accurate to what happened in the ring last night than the 97-93 score. Chambers stood no chance against the defensive artist Mchunu, and it was sort of sad to watch.

Instead of consoling Chambers for his loss, Marco Huck decided to kick sand on Chambers this morning, saying Huck said on his twitter acount “If you even dream of beating me you’d better wake up and apologize…@Champfasteddie I’m a world champion everybody knows where I am, also you to loser… Come on by l’ll give you an autograph! ;-) @Champfasteddie you’re nobody… you want to fight against me, but you’re losing against looser!!!”

Eddie Chambers responded with on his twitter: “@Marco_Huck and I want to see u say this in person ill f*** u up! Stop talking and send contracts ill go to Germany for ya a**! @Marco_Huck difference is I fought HW… I just began CW.. Ill be back.. Matter fact send contract I’m on ya a**!! @Marco_Huck u will always be scared to fight me pussy.. Stop talking if u not going to fight.. And u get gift decisions b****.”

Huck shouldn’t talk. This Mchunu guy would likely do the same thing to him that he did to Chambers, because he’s impossible to hit because of his Mayweather-like defense, his fast hands, and with the way he leans backwards to avoid shots. You can’t Mchunu, and if you try, he counters you with lightning fast counter shots thrown with excellent power. It’s not just the speed and the defense with Mchunu. He’s also powerful as heck.

I think Mchunu would beat Huck badly if that fight were to be made. I mean, I don’t see Huck or his German handlers ever agreeing to fight a talent like Mchunu, but if they were did, I think Huck would get spanked badly. I also wouldn’t mind seeing Huck fight Chambers. That would be a welcome break from all those unknown guys that Huck keeps fighting one after another. At least Chambers can fight, and would make it interesting.

« Mayweather Sr. wants Floyd Jr. to beat Khan, but thinks Devon Alexander will do it first

The best heavyweights under 6 foot »