Mayweather Sr. wants Floyd Jr. to beat Khan, but thinks Devon Alexander will do it first 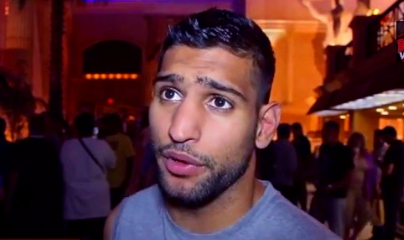 Mayweather Sr. doesn’t see Khan getting past IBF welterweight champion Devon Alexander if Khan takes that fight. Mayweather Sr. believes Alexander will be too good for Khan, and will come out on top in that match-up.

Mayweather Sr. said to Husleboss.com “If there’s one fighter that I want Floyd to whip his a**, that’s Amir Khan…he ain’t got nothing to be brash about. He’s no outstanding fighter…as long as he stays here, he’s going to keep getting his a** whipped. To be honest, I don’t think he [Khan] will win it [Devon Alexander fight]…I think Devon Alexander is going to shut him down.”

I agree with Mayweather Sr. about Khan continuing to get beaten as long as he stays inside the U.S to fight. Once Golden Boy starts matching him against quality opposition once again, Khan will run into the same problems he experienced in his recent losses to Lamont Peterson and Danny Garcia.

Golden Boy has taken Khan away from world class opposition in his last two fights since those defeats by putting Khan back on a soft diet in bouts against Carlos Molina and Julio Diaz, both of which Khan beat. But now that Khan is looking to fight Alexander in December, I expect Khan to lose that fight and continue to lose until Golden Boy backs him off once again with the quality match-making, and puts him back in with fodder opposition that they know he can beat.

I’d like to see Khan fight Maywather Jr. too, but the problem is Khan needs at one credible victory in order to get that fight. If the idea is to put Khan in with Devon Alexander next to earn that fight, then I don’t believe Khan will be successful. Golden Boy needs to put Khan in with a toothless old fighter that has a name, but has lost a lot of his skills.

If Golden Boy can match Khan against an old fighter that is recognizable to casual boxing fans, then it would be good for Khan because he can beat an old timer, and earn the fight with Mayweather Jr. Of course, hardcore fans will think it’s a joke, but there are way more casual boxing fans the knowledgeable hardcore fans, and they probably won’t have clue one what they’re seeing if Golden Boy picks out a recognizable fighter in his 40s and tosses him in the ring with Khan.

« Khan: I used to make a lot of mistakes

Huck taunts Eddie Chambers about his loss to Mchunu »