The best heavyweights under 6 foot 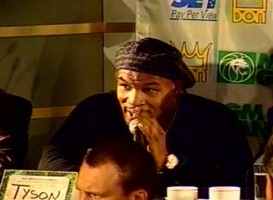 By @BoxingMuse: We are living in an era within boxing when the largest weight class in the sport is contagiously featuring larger and taller competitors. The prestigious ‘Ring Magazine’ current top ten heavyweight rankings are proof of this.

The list’s smallest 200lbs plus pugilist is former WBA heavyweight boxing champ Chagaev who stands at the top end of 5’11”. Nicknamed ‘White Tyson’, Chagaev is an oddity and exception in the division as every other name is over 6’1”. Credit is due to Chagaev who is considered extremely large for his ethnicity as an Uzbekistani, which is located in central Asia. Ruslan even beat ‘The Russian Giant’ Nikolai Valuev.

The biggest of the big men on the list is Tyson Fury, the trash talking Mancunian measures in at 6’9”.

Of course the main title holders in the division of recent times; the Klitschko’s represent the dominance of the taller heavyweight in recent years. The younger of the two, Wladimir stands at 6′ 6″ and older brother Vitali is an inch taller at 6’7″.

Amateur boxing is literally one step ahead of the professional game with a super-heavyweight division but if a super-heavyweight class was implemented to the paid ranks it would surely take some shine off of the former ‘glamour’ division. It would also make the complicated world of prize fighting even more complex.

But let’s reflect back to some of the best heavyweights to grace the ring, measuring in under the six-foot mark.

Beginning with perhaps the most remarkable example, BoxRec lists Qawi as 5′ 5½″. It is possible that this is slightly inaccurate and maybe slightly taller than this but there is one thing certain this former light heavyweight and cruiserweight champion is well under 6’. Although the ‘Camden Buzzsaw’ never won a world title at heavyweight, a short spell at heavyweight saw Dwight face ‘Big’ George Foreman in 1988 although the gutsy smaller man was stopped in the 7th round. There is no doubt his best work was done in the two divisions below, Qawi v Holyfield two fights provided some epic entertainment.

He rates in at #2 on the “100 greatest punchers of all time” according to ‘The Ring Magazine’.

Heavyweight legend Jack Dempsey was once quoted saying; “The hell I feared no man. There was one man I wouldn’t fight because I knew he would flatten me. I was afraid of Sam Langford.”

Langford hung up his gloves with a 214-46-44 record. Amazingly the ‘Boston Terror’ started in the lightweight division and competed in most weights right up to the heavyweights.

A Canadian, born by the name Noah Brusso fought out of Detroit in the 1900’s. An underdog not just in size but when he beat then heavyweight champion Marvin Hart (who was 5′ 11½) for the title and went onto fight infamous Jack Johnson, although Johnson was convincingly winning, the fight was controversial due to being stopped in 14 rounds by the police. The referee declared Jack Johnson the winner. Burns weighed the equivalent of a modern-light heavyweight at 175lbs but this did not stop him from success in the biggest division.

‘The Tuaminator’ although never won a major world title was one hell of a fighter with some respectable wins over such opposition as John Ruiz, Hasim Rahman, Michael Moorer, Fres Oquendo and Oleg Maskaev. The Samoan-New Zealander fell short to names like Lennox Lewis, Chris Byrd and in an epic battle with Ike Ibeabuchi. The forty-year old is soon to make a return by fighting 6′ 7½″Russian, Alexander Ustinov on August 3rd, an opponent who has only lost to Kubrat Pulev.

Regarded as one of the best African-American heavyweights of the

early 20th century, he fought Jack Johnson a total of ten times losing twice, winning once on a foul after two rounds, drawing twice and the other five ending in “No Decisions”. Johnson described Jennette “the toughest man I ever fought.” Also known as ‘Joe’ Jeanette, this tough character honed his pugilistic skills as a youth in street fights.

44-year old James Toney is still fighting but despite his obvious decline we should remember a time when “Lights Out” was a real talent at heavyweight. Achieving world titles at middleweight, super middleweight, and cruiserweight in 2003, Toney faced Evander Holyfield at heavyweight put on a msterclass performance against the ‘Real Deal’ stopping him in the 9th round.

In April 2005, Toney then challenged and beat John Ruiz via a UD for WBA championship, although tested positive for the anabolic steroids during the post-fight drug testing procedure. Toney claimed innocence suggesting steroids were in his sytem due to an medical treatment for an arm injury in his previous fight. Although this occurrence taints Toney’s legacy as a boxer and his time at heavyweight watching his performances against Rahman, Ruiz, Peter and Holyfield shows he had to the talent to compete despite the obvious size difference.

The list could not be complete if I didn’t include one of the most devastating heavyweights of all time. ‘Iron Mike’ who won the WBC, WBA and IBF heavyweight titles at 20 years old. Tyson is one of boxing’s icons and wonders; although longevity was not one of Tyson’s achievements the Catskill kid became bigger than the sport at one point. A product of Cus D’Amato, Tyson was sculpted to make advantages of his small size.I have a feeling that boxing will never see a short heavyweight phenomenon of his magnitude ever again.

Frazier may have been small in height when it came to the heavyweights but is regarded as perhaps one of the toughest and most courageous men to ever lace up a pair of gloves. BoxRec credit ‘Smokin’ Joe as 5′ 11½″ but it is suspected he was closer to 5′ 10″. Frazier’s legendary style of fighting suited him well, bobbing and weaving with a cross arm defence continuously applying tremendous pressure to wear down his opponents. The Philadelphian had a chillingly powerful left hook which famously sat ‘The Greatest’ Ali on his back during their first of three fights dubbed ‘Fight Of The Century’. The city Joe was born and raised in plays homage to the movie character Rocky Balboa but it is far more important to remember a true heavyweight champion of the world.

Arguably the most talented on this list, ‘Captain Hook’ Roy Jones Jr. is still the only pugilist to start his professional career at Light Middleweight and win a heavyweight title. Jones won the WBA Heavyweight title against John Ruiz in 2003 in his first and only heavyweight bout. Can’t help but think Jones’ should have stayed at heavyweight and have a couple of super fights instead of dropping back down two divisions and we all know what happened next. Jones could have rightly picked heavyweight opponents to fight if he had chosen to say in the division, but destiny did not have it planned that way.

The ‘Brockton Blockbuster’ held the heavyweight crown from 1952 up to 1956. And is still the only heavyweight champion to finish his career undefeated, holding the astonishing professional record consisting of 49 Wins (43 KO’s) included victories over Joe Louis, Jersey Joe Walcott and Ezzard Charles. Varying opinions on the real Rocky exist in boxing. Some say he was overrated and never fought the best despite facing the elite during that period others say he deserves the credit he gets as a true and great heavyweight champ. Although one thing is definite this man would have been a handful for any heavyweight champion in history due to his toughness and ferocity. Incredibly Rocky only had a 67” reach which is the same as Manny Pacquiao’s reach.

Born in Cornall, South West England. Bob short for Robert, also known as ‘The Freckled Wonder’ won the middleweight, light-heavyweight and heavyweight title. Ring Magazine place Fitzsimmons at #8 in their 100 greatest punchers of all time, one above George Foreman. ‘The Cornishman who last fought in 1914 was a sublimely talented fighter who become popular by beating James J. Corbett.

Nicknamed ‘Boston Strong Boy’ Sullivan can be considered as truly the original fight character in heavyweight boxing. An outspoken brash individual was once quoted saying “I can lick any son of a bitch in the world!” In Sullivan’s era there were technically no formal titles as we know it to this day e.g. WBC but history remembers Sullivan as a heavyweight champion with fast and frightful aggressive style possessing power in either hand. Documentaries covering his legacy can be found on YouTube.

If there are any notable heavyweight’s under six-foot that I did not mention please feel free to write your comments below or reach me on twitter @BoxingMuse or even if you just want a debate on any boxing matter!

« Huck taunts Eddie Chambers about his loss to Mchunu