Robert Stieglitz to fight on July 13th in Dresden, Germany 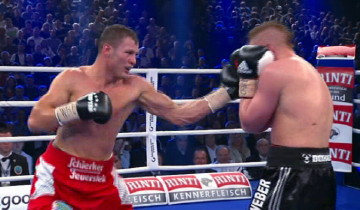 By Eric Thomas: WBO super middleweight champion Robert Stieglitz (44-3, 25 KO’s) will be making his first defense of his World Boxing Organization 168 lb. title on July 13th in Dresden, Germany, against an opponent still to be determined.

There had been talk of Stieglitz possibly fighting former WBO champion Arthur Abraham in a third fight, but it doesn’t look like it’s going to happen.

Stieglitz has already fought Abraham two out of his last three fights, and it would seem almost like two fighters are monopolizing the WBO title if they were to fight for a third time without letting someone else get a shot at the belt.

With a month to go before the 31-year-old Stieglitz defends his WBO title, it’s highly likely that his opponent will be either a bottom 15 ranked contender or possibly someone that’s not even ranked in the top 15 at all.

Stieglitz overwhelmed Abraham in a 4th round TKO last March in Germany. The fight was halted when Abraham’s left eye swelled shut forcing the fight to be halted. Abraham didn’t look like he was mentally all there that night, as he didn’t have his normal aggressive fighting style for that fight.

Stieglitz looked as if he had done his homework well in studying Abraham’s fighting style because he blitzed him in all-out attack from the first round and he just didn’t let up. There was no way that Stieglitz could have maintained this pace for 12 rounds without running out of gas, but luckily for him Abraham’s left eye closed up before he ran out of gas.

Stieglitz will eventually have to face his #1 challenger George Groves at some point. It doesn’t look like that fight will be happening until possibly late this year, if not early in 2014. But he’s going to have to take that fight if he wants to hold onto the WBO title.