What we learned last weekend 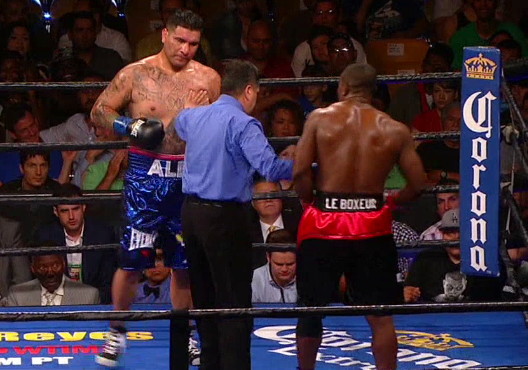 By Gav Duthie: A very interesting weekend of boxing has been and gone with various ramifications arising for future fights across the divisions. We witnessed top level action from Germany, the UK And the US and after catching up with it all this is what I have surmised.

Crolla is one unlucky guy

For most fans after Saturday night Anthony Crolla is a champion without the belt. For anyone who believes in Karma they may have to re-think after Crolla a local hero was once again robbed of his chance to realize a dream. Tackling burglars of his next door neighbor Crolla ended up with a broken ankle and fractured skull in December 2014. It was amazing to receive another title shot only 7 months later. If justice was to prevail he would win a world title but nobody should get something they don’t deserve. The problem is he did deserve it. He forced the action, landed the better shots, hurt his opponent and after WBA lightweight champion Darleys Perez being deducted 2 points for constant low blows the win should have been a formality. It ended a draw and promoter Eddie Hearn is looking for an immediate rematch. The question is can Crolla do it again?

WBO super middleweight champion Arthur Abraham the adopted German of Armenian birth put a final nail in the coffin in his rivalry over Robert Stiegletz. Abraham broke a three year hoodoo without a knockout to end the dispute in a similar style as Juan Manuel Marquez over Manny Pacquiao. His last knockout had come in December 2012 against Mehdi Bouadla. Abraham seemed to be exposed in the super 6 tournament with one-sided losses to Carl Froch and Andre Ward. With the Brit retiring however and the American likely to fight at 175lbs Abraham has others to do battle against. Badou Jack (WBC), Fedor Chudinov (WBA) and James DeGale (IBF) are a complete new set of champions and Abraham has a good chance against any of them.

Frampton-Quigg is more 50/50 than we thought

On Friday if you asked 10 people who wins between IBF super bantamweight champion Carl Frampton and WBA super bantamweight champion Scott Quigg 8 or 9 say Frampton. Fast forward to Saturday night and this may have changed. Frampton was generally considered a superstar after his two performances against Kiko Martinez (WTKO 9, WUD 12). Many thought it was a risk to put Quigg in there with the Spaniard but he destroyed him in just 2 rounds. Across the pond Frampton was on his backside twice in a fight that was supposed to be routine. The excuses were also a bit worrying

The latter is a worrying one because at 5’4″ Frampton should be looking at his training and nutrition not moving up in weight. He is an extremely skilled fighter but has a short reach and the higher up in weight he goes the more difficult it will be. I would still pick Frampton to beat Quigg but it is certainly now more interesting.

Arreola should not be in contention for world shot

Chris Arreola’s draw at the weekend was probably the best result because we won’t have to waste our time watching him lose to WBC heavyweight champion Deontay Wilder in his third attempt at a world title. I respected Arreola’s self assessment that he wasn’t good enough to deserve the shot. Drawing with relatively unknown Fred Kassi may have killed his chances for the time being. The problem with Arreola is that he has been handed chance after chance without having to work too hard. Arreola is decent if he gets fit and improves his stamina but until he takes his gifts seriously he should be nowhere near fighting for a world title.

Price could be finished

After the 3rd knockout of his career British heavyweight David Price and his fans will be feeling pretty sorry for themselves. The worst of it is I don’t think Erkan Teper is a world beater. The knockout was brutal but just as worrying was that Price was dominated from the opening bell. The Tony Thompson defeats have damaged him badly and rather than jumping back in at the deep end he has been in the paddling pool for the last two years. Injuries and a lack of good quality opposition has done nothing to improve his confidence but now it is completely shattered. World honors look well out of site now so he needs to decide if he still wants to box at a different level or look at changing careers.