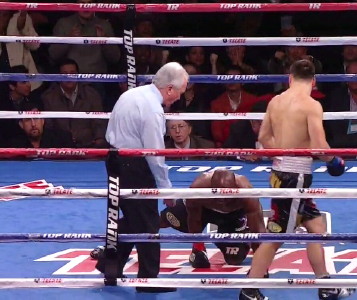 Bradley (30-0, 12 KO’s) is quite fortunate that he was able to escape the Provodnikov fight with his title still in his possession because he could have lost the fight had the referee called 10-8 rounds in the 1st, 2nd and 6th rounds when Bradley badly hurt.

That fight showed some serious flaws in Bradley’s game, and he’s going to need to make some changes in the future to make sure he doesn’t get in a war like that again. Bradley was impressed with Provodnikov’s power afterwards, saying he’s got the kind of power that would enable him to beat anyone in the division.

However, there are harder punchers at 147 than Provodnikov, and all that fight showed was that Bradley doesn’t have the chin to fight guys in a toe-to-toe manner. The only way Bradley can succeed in the welterweight division is by using the kind of movement that he displayed in his controversial victory over Manny Pacquiao last year in June.

That’s the way Bradley is going to be able to find success at 147, and even fighting like that he’s still not a really effective fighter. I had Bradley losing to Pacquiao even with his movement. There are no easy outs for Bradley because his promoter wants to match him with his Top Rank stable fighters Juan Manuel Marquez, Pacquiao, Brandon Rios, and Mike Alvarado. In addition to that, Bradley still has to defend his title against his #1 WBO challenger Keith Thurman at some point in the future.

I’m sure Bradley’s promoter Bob Arum will have him – or whoever captures his WBO title next – put off the defense for as long as possible given that Thurman is promoted by Golden Boy Promotions, but he can’t put Thurman off forever. He’s going to get that shot, and if it’s Bradley he’s facing then I don’t like Bradley’s chances in that fight.