By Dan Ambrose: Tim Bradley says he wants to see Ryan Garcia and Gervonta ‘Tank’ Davis fight each other to help take their careers to another level.

Although Davis would have a considerable advantage in experience, Ryan possesses that left hook SMASH equalizer that gives him a real chance of winning. If Ryan connects with his left hook to the chin of Tank Davis, it could be all over for him.

Garcia, 22, had been trying to set up a fight with Tank Davis earlier this year, but a mental health issue side-tracked those plans. Now, Ryan is expected to face former IBF 130-lb champion Joseph ‘Jo Jo’ Diaz Jr in October on DAZN.

That’s going to be a real war between these two all-offense fighters, and the winner will be in a good position to take on Tank Davis, 26, for a massive fight on pay-per-view.

Ryan and Tank Davis on a crash course

“I think Davis and Garcia need each other. I don’t think we’ve seen the best of Davis,” said Tim Bradley to ESPN.

One problem that could get in the way of Ryan Garcia taking on Gervonta is the weight. The Mayweather Promotions star Tank Davis recently moved up to 140 and defeated WBA secondary light welterweight champion Mario Barrios, by an 11th round knockout last June 26th.

If Tank decides to stay at 140 and defend his ‘regular’ WBA title, Ryan would need to go up in weight to face him. Ryan and his promoters at Golden Boy Promotions may choose to keep him at 135, a weight division in which he has many advantages over his shorter, mostly weaker opposition.

If Ryan moves up to 140, he’ll be giving away his height advantage against the equally tall 5’10” Josh Taylor, Jose Ramirez, and the 5’11” Viktor Postol.

There’s talk of Gervonta possibly facing former WBA/WBC welterweight champion Keith ‘One Time’ Thurman next. It’s unclear whether the rumors are true of those two guys battling it out, but Thurman seems highly interested in taking on Tank.

Thurman (29-1, 22 KOs) is too big to meltdown to 147, so Tank Davis would need to come up to welterweight if he was seriously interested in facing ‘One Time.’ 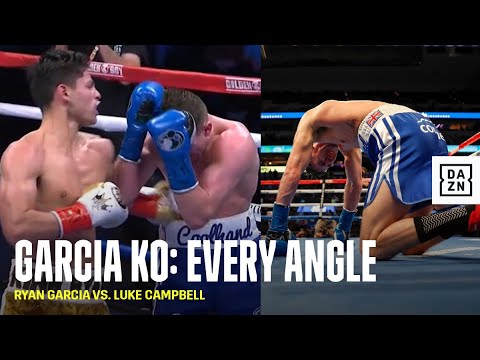 “Tank will set him up, he will play defense and lure [Ryan] Garcia in, and he will find a way to land that kill shot and hurt Garcia,” said Bradley. Davis is one of the best finishers in boxing, and once he hurts you, it’s over.”

“Garcia has the hype around him, the followers on social media,” Bradley continued. “He has speed, and he has a size advantage over Davis. Garcia also has a tremendous left hook; he seems to be getting better training under the tutelage of Eddy Reynoso and Canelo,” said Bradley.

The power and speed would be on Garcia’s side, but it would be difficult for him to adjust to Tank’s high level of talent.

Ryan hasn’t fought the right type of position during his five-year pro career to prepare him for a guy like Tank Davis. That’s the whole problem in a nutshell.

Up until now, the only decent quality fighter Ryan has faced in the professional ranks was the recently tired Luke Campbell, who is nowhere near the level of Tank Davis.

Assuming Ryan beats Joseph ‘Jo Jo’ Diaz Jr in October, that fight will go a long way towards giving him the type of experience he needs to compete on an even playing field with Tank Davis.

Ideally, Ryan should still look to beat two or three of these fighters to get him adequately ready to take on Tank: