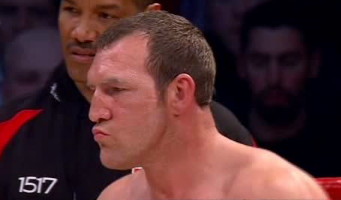 By Scott Gilfoid: Golden Boy Promotions are looking to land 41-year-old Audley Harrison as the opponent for the talented unbeaten American heavyweight Deontay Wilder (27-0, 27 KO’s) to face on the undercard of the Amir Khan vs. Julio Diaz fight on April 27th at Sheffield’s Motorpoint Arena. I think Golden Boy badly wants a Brit for Wilder to face on this card, but what can you do if they can’t get the guy they’re after. It’s not as if they can drag Harrison into the ring to face Wilder.

It’s still unclear whether Harrison will accept the fight with Wilder. If Harrison says no to the risky fight, then 41-year-old Martin Rogan (16-4, 8 KO’s) is reportedly willing to step in and face Wilder himself, according to thesun.co.uk.

The money that Golden Boy is offering has to be good cash, so I can’t see Harrison saying no to the fight, but if he does then you’ve got to figure that the risk was a little too much for his tastes. After all, Harrison has a nice little three-fight win streak after capturing the Prizefighter tournament championship last month by beating Rogan, Derric Rossy and Claus Bertino in three fights.

Going from those soft fights to a rock solid KO artist like the 6’7” Wilder has got to be like a bad dream because he’s the power to end Harrison’s little three-fight win streak with a single punch. We saw Harrison get knocked out by the 6’8” David Price in the 1st round last October.

It took Price a handful of shots to finish Harrison off, but with Wilder we’re talking one hard shot and it’ll be lights out for Harrison.

I personally like the idea of Wilder and Harrison fighting because it’ll give Wilder a good opportunity to shut the yaps of all those boxing fans that have been spreading the rumor that Wilder was dominated and knocked down by Harrison in a sparring session last year when Wilder was trying to help Harrison get ready for his fight against Price.

Having Harrison get in the ring with Wilder will shut down those rumors permanently by Wilder destroying Harrison in one brutal round. I can’t even call it a brutal round because Harrison won’t take a lot of punishment. I mean, he’ll just get hit once and go down, and that’ll be it.

I’m glad that Rogan is willing to take the fight with Wilder, but that’ll be a slaughter. I know it took Tyson Fury six rounds to KO Rogan, but believe me it’ll be over quick, especially if Rogan hits Wilder with anything. Wilder will respond immediately with a huge right hand, and I can see Rogan getting poleaxed.

Khan-Diaz: Amir looking to get back to world level »