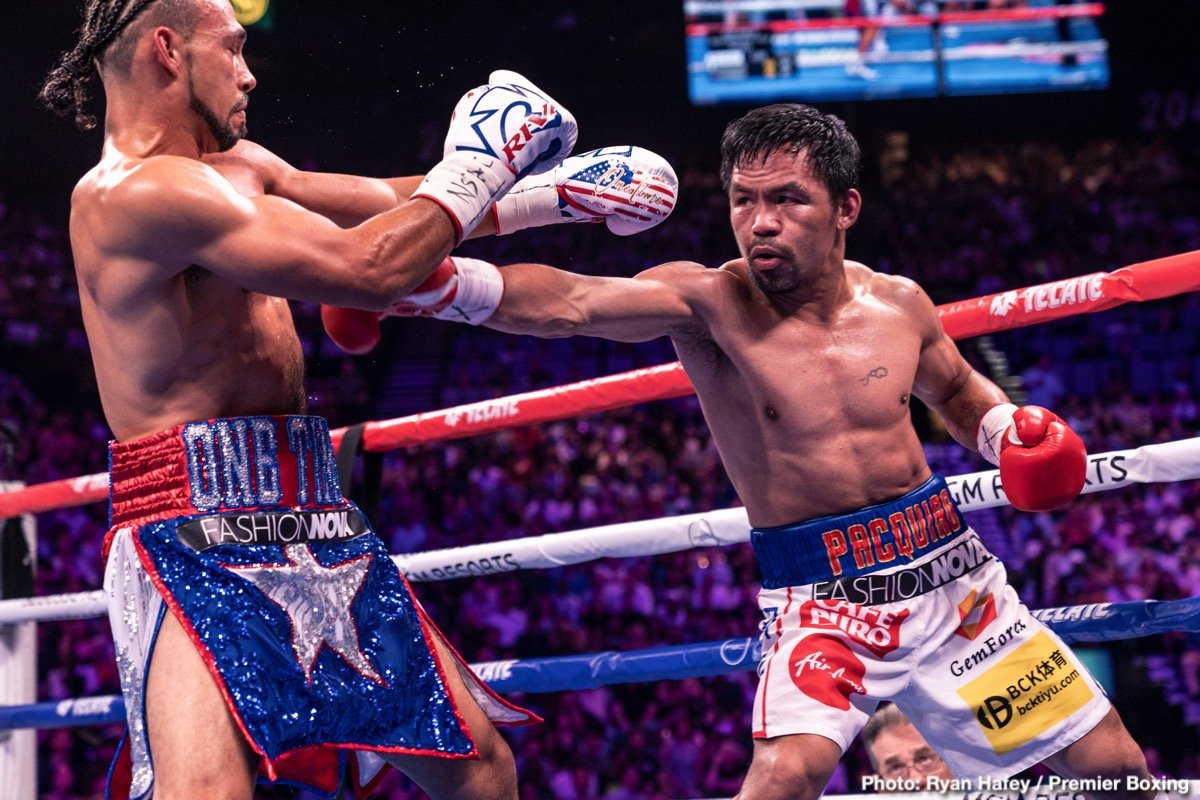 By Jeff Aronow: Tim Bradley says Manny Pacquiao has spotted flaws in Errol Spence Jr’s game that he believes he can take advantage of. That explains for Pacquiao chose to take the fight with Spence on August 21 on Fox Sports PPV

Bradley isn’t sure who to pick in the Spence vs. Pacquiao fight because they both have flaws that they can exploit.

Bradley noticed that Spence always positions his head in the same place when he attacks his opponents. He says Pacquiao (62-7-2, 39 KOs) will see that tendency with Errol and look to take advantage of it.

What’s going to be difficult for Pacquiao is dealing with the size, power, and relentless pressure from Spence. He averages 75 punches thrown per round and are shots thrown with huge power.

Pacquiao will need to use more defense in this fight to keep from getting beaten up and stopped.

“Pacquiao is one of those guys that picks and chooses guys that he believes he’s got a little bit of an advantage,” said Bradley to SnowqueenLA.

“I think that he sees that Spence is a little slower than what he’s used to fighting. Spence being the southpaw, taller, you got to go with Spence as far as the favorite goes.

He’s the younger guy, he’s the fresher guy, and he puts a massive amount of pressure on guys all the way to the end of the fight. He throws a lot of punches.

That’s something Pacquiao hasn’t really seen before in some time, I would say. Pacquiao, the speed, the footwork, the in and out movement, that’s going to be frustrating for Spence, honestly.

Spence does something that Pacquiao likes. He’ll work and then bring his head back to the middle. He’s going to wait on his opportunities. Pacquiao isn’t going to counter with one shot.

He’s going to counter with combinations. Combinations are coming your way, buddy [Spence], so you better be aware of those.

You’re not going to be just standing there catching shots the way I see you do, Spence. I understand that.

You’re blocking shots, but you’re not going to block Manny Pacquiao all those punches he’s throwing at you.

There has to be some reason why Pacquiao chose to fight Spence, and it could be that he looks slow and beatable. In Spence’s lat fight against Danny Garcia, he was poor.

We don’t know how much the car crash took out of Spence. It might be significant. But Spence wasn’t looking good even before his fight with Danny Garcia.

If you compare how Spence looked against Chris Algieri and Leonard Bundu in his performance against Danny and Shawn Porter, it’s noticeable. Spence’s punching power is still there, but his movement and defense have taken a hit.

“This guy [Pacquiao] is a phenom when it comes to the counter punches, and also with the footwork and those quick hands,” Bradley said. “Be aware of that. The power is the last thing that leaves on a fighter.

“So you got to be careful with the punching power of Manny Pacquiao. That left hand is a monster.

“It’s like taking a piece of metal and putting it in a socket. It’s shocking. It’s a great fight. Pacquiao definitely has a puncher’s chance, I believe.

“It depends on what he has on the back end of the fight. I believe Pacquiao is going to start off quickly, fade a little bit in the middle, and then pick it up towards the end.

“Spence has another gear towards the back end of the fight that I believe he should be able to outlast Pacquiao.

“You never know. Pacquiao is a legend for a reason. Eight division world champion, it’s going to be tough, I don’t know.

“I’m going to favor Spence slightly, but I wouldn’t be surprised if Pacquiao pulls it off,” said Bradley.

Two years ago, Pacquiao’s power & speed was still incredible against Keith Thurman in 2019. Muscles have memories, so Pacquiao should rebuild any muscle tissue that he lost from inactivity.

If Pacquiao can riddle Spence with shots the way he did against Joshua Clottey, Antonio Margarito, and Miguel Cotto, he’s got a heck of a shot at winning this fight.

“If they fight, I got Crawford all day, knockout,” said Bradley to SnowqueenLA when asked who wins between Errol Spence and Crawford. “I got Crawford by stoppage.

“People think I’m crazy, but if you look at boxers from the past and even from the present, the guys that have the better footwork that have more to offer.

“Spence is a big guy, yeah, he’s solid, he comes forward, he can be aggressive. We’ve seen him box against Mikey Garcia.

“He knows he can control range, but you’ve got a guy like Terence Crawford that can do a little bit of everything, switch southpaw.

“He’s the more well-rounded fighter, and he has the better legs. Spence is a guy that is flat-footed and walks you down flat-footed.

“Crawford is a guy that can move, pick up his feet, change directions and surprise you with shots you don’t see. He’s a fantastic counter puncher,” said Bradley.

This fight is probably never going to happen due to the promotional issues.

But if it did get made, Crawford would have a great chance against what we’ve seen of Spence in his last two fights against Danny Garcia and Shawn Porter. Spence doesn’t look like the guy he used to be.