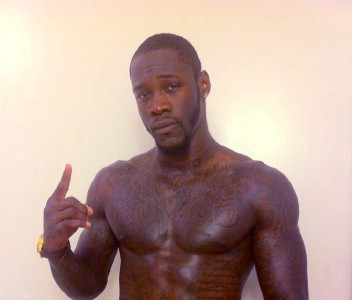 (Photo courtesy of Deontay Wilder twitter) By Scott Gilfoid: 6’7″ unbeaten American heavyweight knockout artist Deontay Wilder (25-0, 25 KO’s) will be facing the equally huge 6’7″ Kelvin Price (13-0, 6 KO’s) on December 15th on the undercard of the Amir Khan vs. Carlos Molina fight on Showtime Boxing at the Sports Arena, in Los Angeles, California. Price, 37, was supposed to have fought Wilder during the summer but unfortunately Price suffered a rib injury and couldn’t take the fight.

Price is a very good fighter with wins over the likes of Tor Hamer and Julius Long. He’s got fast hands, good power and excellent boxing skills to go along with his huge size. Price is definitely someone that should be ranked in the top 15 if he were a busier fighter. Unfortunately, he’s only fought 13 times in his five year pro career and that’s slowed his progression down.

Wilder wants to take this fight and then after beating Price, take another step up against a world class opponent in early 2013. This will be Wilder’s year, because he plans on fighting for a world title by the summer against one of the Klitschko brothers or Alexander Povetkin. Wilder has the offensive tools to be successful with his huge right hand, which is easily the best in boxing right now. Wilder now also has a left hook that easily devastating so that he’s not limited to just his right hand now.

I personally think Wilder’s left hook is even better than his right hand now, and that’s pretty scary because his right hand is devastating. Wilder’s jab is also quite good now and getting close to the same kind of power that Wladimir Klitschko’s excellent jab. Speaking of Klitschko, Wilder has been busy helping him train for his fight with challenger Mariusz Wach on November 10th. Wilder has quickly emerged as one of his best sparring partners in camp. Wladimir may find out when it comes to the actual fight with Wach that his real battle was in training camp with the talented Wilder and not with the much slower, less powerful Wach.