Arthur Abraham vs. Robert Stieglitz, fight of the year? 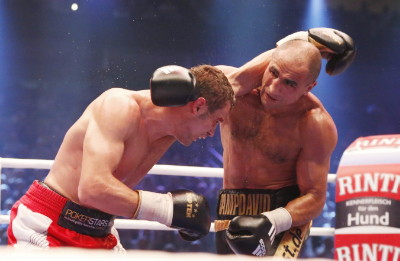 (Picture: Photo Wende) By Mark Havey: It turned out to be the kind of fight I love. A grueling battle of will with skill incorporated. From start to end the fight could have gone either way. both men wanted it so bad. It was the opposite to what I expected. I thought the fight would be fairly dull.

Abraham trying to slug it out and failing. Stieglitz keeping the fight at range and boxing smart. I was shocked to see Stieglitz battle with King Arthur, and do a good job of it.

It was a real treat to start off the new boxing season. We have a good month coming up in September with real potential for great, even fights. But I expect to see last night nominated for fight of the year.

Stieglitz still has a bright future ahead of him. if he still wants to face Groves, it could be a good fight for both of them. I’m sure the terms will be different, but Stieglitz needs to expect a cut in purse. Rodriguez could be another good fight. Pavlik would help him enforce his place amongst the top super middleweights.

Abraham, the new WBO super middle weight champion has the world at his feet. Froch is a fight I’m sure he will want. Bute would work well, Abraham has a belt, Bute doesn’t. The fight should be easy to make. Dirrell tweeted that he wants the fight. I’m sure ward was watching with interest. Cleaning up the division is no doubt appealing to him.

« Scott Harrison “The Real McCoy” is back

Dirrell: I doubt Abraham will fight me »