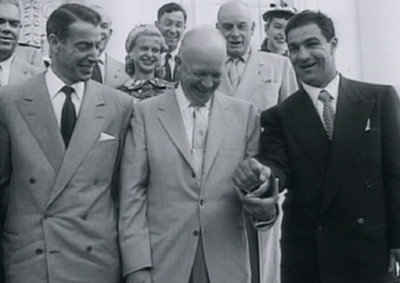 By John F. McKenna (McJack): In a gesture that is long overdue former undefeated heavyweight champion Rocky Marciano will finally get his due recognition. “The Brockton Blockbuster” will be honored by the World Boxing Council (WBC) on the date of his birth September 28 in his hometown of Brockton, Massachusetts.

The WBC has also announced that prestigious Mexican sculptors Mario Rendon and Victor Gutierrez are in the process of constructing a 30 foot high statue to honor the late champion. The statue when completed will be placed in Brockton to honor Marciano and his accomplishments in the ring.

On his way to claiming the heavyweight title Marciano KO’d the fighter who was his idol when he was growing up, the great Joe Louis. In a dramatic and emotional scene Marciano visited Joe in his dressing room after the fight to console him and attempted to tell him that he could never have accomplished what he had if Louis had been in his prime. “The Brown Bomber” however cut Rocky off and told him he would be a great champion in his own right. History proved Louis to be correct.

A year after the Louis fight Marciano won the heavyweight title by scoring a 13th round KO over 38 year old “Jersey” Joe Walcott. The fight was a real barn burner with “Jersey” Joe sending Rocky to the canvas in the first round. But Marciano got up and although behind on the score cards gradually wore Walcott down. The right hand which Rocky used to score the knockout over Walcott was captured in an iconic photo that became one of the most famous photos in boxing history.

A year after their classic thriller Marciano and Walcott fought again, with Rocky scoring a first round KO. Marciano fought two thrilling fights with Ezzard Charles and another with “The Old Mongoose” Archie Moore before he decided to hang up the gloves on April 27, 1956. Marciano went into training briefly in 1959 after Ingemar Johansson took the title from Floyd Patterson in June of that year. After training for a month however Rocky decided that a comeback was not in the cards for him.

Rocky was always very protective of his money. He had heard about the nightmares which had befallen other great fighters, namely his friend Joe Louis. There was another instance in which he encountered the great ex lightweight champion of the 1940’s Beau Jack shining shoes outside the Fontainebleau Hotel in Miami. Marciano recognizing Beau asked him what he was doing. Beau Jack responded by telling Rocky that he was okay and was happy to be doing what he was doing. The incident left a long lasting impression on Marciano which resulted in him becoming paranoid about boxing, promoters, managers and the others who he felt were attempting to take his money. That paranoia did not stop him from helping other fighters who had fallen on hard times as he demonstrated numerous times.

Although Marciano was considered even when he was still active to be a great heavyweight champion he has been largely forgotten in the modern era. The media hype machine used to promote fighters who followed him had not yet been developed.

« Khan: I’ll shut the mouths of the fans who doubted me

Broner to make easy work of Escobedo on July 21st »