Chris Byrd talks about his amateur and pro careers 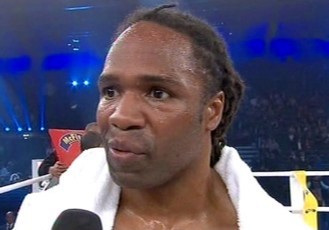 By Ian Aldous: Chris Byrd (41-5-1) reached the pinnacle of both the amateur and professional ranks during his career. A silver medal at the ’92 Olympics and two reigns as World heavyweight champion are testament to that fact. Here, Chris fondly looks back on his time inside the ropes.

You lost out on a place with the 1988 Olympic boxing team at the Olympic trials. Was this a big setback for you or did it motivate you to come back and work even harder?

CB “Oh, it motivated me, big time. You know, I was only 17 years old so it was a blessing that I actually didn’t make the team in ’88 because my body wasn’t mature enough to do anything at the Olympics with older guys. I was a skinny 17 year-old and I really wasn’t ready for that level of competition.”

Your middleweight silver medal at the 1992 Olympics was obviously a massive achievement. Were you satisfied at the time or disappointed that you hadn’t won gold?

CB “Well, you know it was a little bit of both. I was disappointed at not winning the gold medal because I performed so well at the Olympics in the four fights before losing and I thought for sure I was gonna win a gold medal. I’d seen Oscar De La Hoya win his gold medal two fights before I fought, so it was hard, but when I went back to the locker-room I cried and I’d never cried after an amateur fight. Vernon Forrest put it in perspective for me, he said ‘we been working our whole lives to get to this moment and you won a medal’ and he didn’t come home with a medal and I was like, wow, he’s right. He lost his first fight but he was happy for me, so he put it in the right perspective.”

When you finished your amateur career as a middleweight, did you ever think you’d go on to fight at heavyweight, let alone win titles in the sport’s flagship division?

CB “Not at all! Not at heavyweight, at super-middleweight or light-heavyweight – yeah but cruiserweight or heavyweight, no, never! When I look back on it, I put my faith and trust in the Lord. I’m telling you, every fight was a major challenge. Even when I fought guys that were smaller heavyweights, they fought at heavyweight and were natural heavyweights. For me, if I weighed in at 214lbs or 215lbs, I really weighed 208lbs. After the weigh-ins most guys put on weight but I’d lose weight! It was a struggle just to keep my weight up! That was the hardest thing for me in boxing.”

Describe for us what it was like when you found out you would be fighting for the WBO heavyweight title against Vitali Klitschko in April 2000 at very short notice.

CB “It was like 9 (days), it was incredible. I had never seen Vitali Klitschko fight in my life. I’d heard of Wladimir Klitschko and he was one of the ’96 Olympic gold medallists and he was tall. His brother, I’d just heard about because he was foreign and only fighting in Germany. So, I was excited and then my lawyer said you know he’s 6’8”. I was like, what! But the thing was he was 28-0 with 28 KO’s and my only loss was against Ike Ibeabuchi at that time and I’m thinking, man I’m gonna get knocked out again! This is not gonna happen, so it was like a whirlwind, I went to Germany and it was just crazy. Everything surrounded Vitali Klitschko, he’s the next big thing. This was his coming out party, so I was like, I’m here, I’m not a coward, let’s go. It was funny because when we got to the middle of the ring, everybody started laughing! That’s how bad it was. My thought was, give me four rounds and sure enough, after four rounds they were cheering my name. It was incredible.”

You’ve fought both of the Klitschko brothers. Do you feel that they get the respect from fans/experts that they should?

CB “Not at all. Not at all. Maybe they’ll go down as not only the best heavyweight brothers but also maybe top 10. As far as match-ups, who beats them in history? When you talk about match-ups and styles, how you gonna get ‘em? I’m a huge Tyson fan and people say Tyson would have crushed them in his prime. How? He’s too short. Like David Haye, the thing about David is he’s the third best heavyweight in the division right now. He’s got talent and he can punch and they put Povetkin and Adamek in front of him (rankings) and I’m like, he’d knock both of ‘em out and out-skill ‘em. But as far as Vitali and Wladimir, the match-up is too hard and David fought Wladimir when he’s older. When I first fought Wladmir, he was like 24 and Vitali was 28! I’m fighting the young Klitschko brothers. Those guys can fight, I give them major respect and I’m proud at the fact that I got the chance to fight both of them.”

What was the proudest moment of your time spent in the professional game?

CB “Oh man, I don’t even know. For me, I love this sport so much and I captured every moment like fighting the Klitschko brothers. Even though I ended up losing to Wladimir twice, great moments. Fighting one of the greatest of all-time, Evander Holyfield. I don’t care when I fought him, I fought Evander Holyfield and we fought for the heavyweight championship of the world. It was pretty legitimate because he just beat Hasim Rahman and I’m like, I’m in the ring with Evander Holyfield! And then get the chance to defend the title, I don’t care against who, it was just about defending the belt. To be at that highest level of the sport. So, I look at my career and all these proud moments from the juniors to the senior level, fighting in the Olympics, that’s the highest you can go in the amateur sport, then you go to the highest in professional. I’m just proud of all those moments. In my amateur career and my professional career, I got to share it with my wife. My wife went everywhere with me and us two got to share together, it was great.”

Following retirement from the sport, Chris is a motivational speaker and speaks to people all over the country. Check out his official site www.chrisbyrd.com

« Did Khan learn anything from Peterson fight?