Did Khan learn anything from Peterson fight? 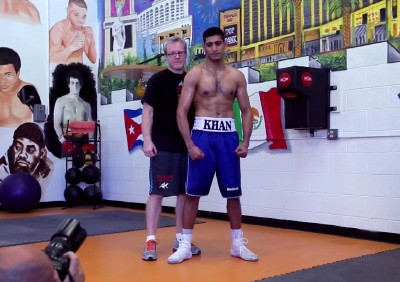 There is no doubt that the Khan – Peterson fight was an entertaining one. Amir wound up losing the highly controversial fight, which at times appeared to turn into a slugfest. Much to the chagrin of five time trainer of the year Freddie Roach, Khan ignored his instructions ahead of the fight to stay off the ropes. But “King” Khan instead fought Peterson’s fight, allowing Lamont to pile up points in the early going. Khan repeatedly allowed himself to be pinned on the ropes where Peterson was allowed to effectively use his superior strength and body punching skills.

It seemed at times that Amir was attempting to show his machismo by going toe to toe with the stronger Peterson. Khan also appeared to be demonstrating to his critics that he can indeed take a punch. Amir has taken a lot of heat from boxing fans who claim he cannot take a punch after witnessing his one round KO loss to Breidis Prescott (25-4, 20 KO’s) in 2008.

British boxing promoter Frank Warren is of the opinion that the 25 year old Khan needs to play to his significant strengths rather than his weaknesses. In both his fights with Marcos Maidana (31-3, 28 KO’s) and Peterson, Khan did not fight the most intelligent fight Warren believes. His defense needs a good deal of work and sometimes he allows himself to be drawn into the wrong kind of fight.

Warren was quoted in Sky SPORTS saying the following:

“Look at Mayweather – he’s a master tactician and knows how to use defensive and offensive skills and has been knocking out people recently.

“He knows what it takes to win and fights very smart.

“Amir has the skills, speed and power but what he needs to work on are the ‘ring smarts’ and not get carried away.

“He’s still very young and learnt a lot from the Peterson fight. We’ll see if he applies that on May 19.”

It goes without saying that the Peterson fight is a must win match for Khan. His dreams of eventually taking on undefeated WBC welterweight champion Floyd Mayweather Jr. (42-0, 26 KO’s) and becoming the #1 Pound for Pound fighter in the world will all go up in flames if he is unable to get past Lamont.

« For how long can the mandatory challenger be avoided?

Chris Byrd talks about his amateur and pro careers »