Algieri is all wrong for Pacquiao, says Byrd 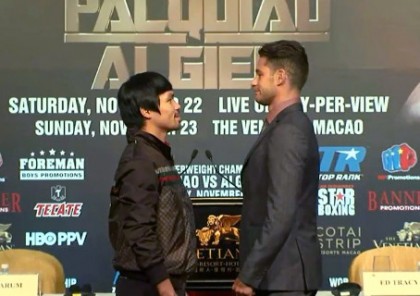 Byrd sees Algieri’s 5’10” height as being all wrong for the 35-year-old Pacquiao, and he also sees his defensive skills and youth being a problem for the aging Filipino star as well. Byrd likes Algieri’s boxing skills as well, and he thinks he could end up out-boxing Pacquiao in this fight.

Algieri was an unknown up until recently when he defeated former WBO light welterweight champion Ruslan Provodnikov by a 12 round decision last June in exposing one of Freddie Roach’s prize pupils in front of a large national audience on HBO Championship Boxing.

Roach claimed that Provodnikov should have won the fight, but few fans of the sport agreed with him.

“You look at the height difference in that. I don’t think people realize that kid can fight,” Byrd said to Fighthype. “He [Algieri] can fight, he can box, he’s tall, he’s long. He’s really all wrong for Pacquiao. Who is Algieri really? He beat [Ruslan] Provodnikov. But he took that risk.”

Roach tried to warn Pacquiao’s promoter Bob Arum that he shouldn’t have matched him against Algieri because he felt his defensive style would pose a difficult one for Pacquiao, but Arum went ahead and matched Pacquiao up against Algieri anyway.

Believe it or not, Roach still wanted Pacquiao to fight Provodnikov even though he’d been beaten by Algieri. Roach wanted the loser of the Algieri-Provodnikov fight to be awarded instead of the winner of it.

It was pretty disappointing for Roach to take that stance, but then again Roach was just trying to be a good trainer in looking out for his fighter Pacquiao. Roach said in the past that he’d never match one of his fighters against another one if he ddin’t believe they could win the fight 100%, and I guess that’s why Roach didn’t like the Pacquiao-Algeri fight because here was another fighter with the skills to beat Pacquiao.