Adamek to have his chin tested by Aguilera on March 24th 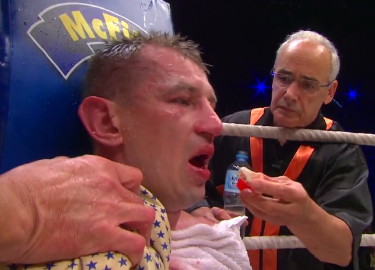 By Allan Fox: Former two division world champion Tomasz Adamek (44-2, 28 KO’s) is ready to get back in the ring next month against the hard hitting 2nd tier heavyweight Nagy Aguilera (17-6, 12 KO’s) in a scheduled 10 round bout at the Aviator Sports Complex, Brooklyn, New York.

Adamek was beaten badly in a one-sided loss to WBC heavyweight champion Vitali Klitschko last September and wanted to get back in the ring against someone with decent ability.

That’s here Aguilera comes in. He’s got good power, but he’s flawed enough for a small heavyweight like Adamek to beat him without too many troubles as long as Adamek doesn’t get hit too hard. After getting up and taken out by Vitali, you can’t be too sure how Adamek will be affected by the loss in terms of his ability to take a hard shot.

Aguilera is a much better offensive fighter than the stiffs that Adamek had been facing leading up to his fight against Vitali. However, Aguilera’s defene and his ability to take shots isn’t that great, and that’s where Adamek will likely have a huge advantage in this fight as long as he doesn’t walk into one of Aguilera’s big shots.

Aguilera has lost to Antonio Tarver, Chris Arreola, Samuel Peter and Maurice Harris in the last two years. The defeats have knocked Aguilera out of the top 15, where he briefly had a position after stopping former WBC heavyweight champion Oleg Maskaev in the 1st round in December 2009. Aguilera can be trouble if you don’t have a good chin or good skills.

Adamek could have problems with this guy, because Aguilera is young at 25 compared to the 35-year-old Adamek, and he’s a naturally big guy at 6’3″ 240lbs compared to the pumped up 6’2″ 215 pound Adamek. Aguilera doesn’t have to lift weights and eat a ton of food to be strong heavyweight. He could be a lot of problems for Adamek if he’s able to catch up to him on March 24th to land his big shots.

« Will the WBC strip Chavez Jr. if he fails to fight Sergio Martinez next?

Mayweather: I want eight-ounce gloves for Cotto; I want blood »