Abraham likely to get Kessler-Stieglitz winner 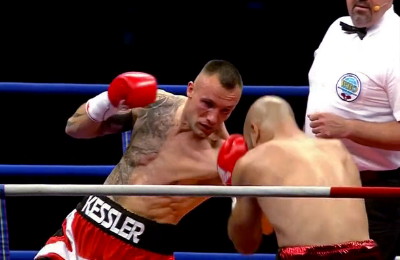 By Scott Gilfoid: If you were one of the many boxing fans that were hoping to see American talents WBC/WBC super middleweight champion Andre Ward or Andre Dirrell get the first crack at the April 14th winner of the Mikkel Kessler (44-2, 33 KO’s) vs. Robert Stieglitz (41-2, 23 KO’s), you can pretty much forget all about that happening because it’s not going to go down.

Arthur Abraham (33-3, 27 KO’s) was recently installed as the number #2 contender by the World Boxing Organization and he’s already talking about getting a shot at the winner of the Kessler-Stieglitz fight.

Both Kessler and Abraham fight for Sauerland Promotions, which kind of makes it academic that the fight will be happening next. Will be surprised if Kessler faces Abraham rather than Dirrell or Ward? Nope! I never was crazy enough to think that Kessler would fight either of them in the first place because he already got spanked by Ward once in November 2009 in the Super Six tournament and he’s been making excuses ever since.

And facing Dirrell is like the same as Kessler fighting Ward. Both of them are almost carbon copy talents, only Dirrell brings a little more hand and foot speed and defensive skills to the table.

Kessler will play it safe by fighting the short 5’9” Abraham to get an easy win rather than risking his hide fighting the likes of Ward or Dirrell and losing the WBO belt in his first title defense.

However, I have strong doubts that Kessler will even get by Stieglitz because that’s going to be a very tough fight for him and he’s already badly faded from what he was in 2007. Stieglitz has gotten Kessler at the right point in his career when Stieglitz is at his best and Kessler is on the downside of his career. All Stieglitz has to do is outwork Kessler and he’ll get the ‘W’ in this fight.

Chisora: I will attack Vitali from the start and hurt him »