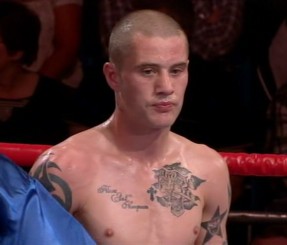 By Scott Gilfoid: WBO super featherweight champion Ricky Burns (32-2, 9 KO’s) has opted not to take on the dangerous and talented unbeaten Adrien Broner on November 26th. Instead of fighting Broner and possibly suffering a loss, Burns is vacating his World Boxing Organization belt and will be moving up to fight the much more vulnerable Michael Katsidis of Australia on November 12th for the vacant WBO lightweight title.

The WBO lightweight title is now open because previous champion Juan Manuel Marquez has decided to vacate that belt, along with his WBA lightweight title rather than waste time defending the belts. Marquez only wants to fight huge stars like Manny Pacquiao and Floyd Mayweather Jr., not the obscure guys without much of a following.

Burns’s manager Alex Morrison said this to STV: “We have had confirmation from Frank Warren’s people that Ricky will now face Michael Katsidis in November. The [WBO] lightweight title is vacant just now and we are all agreed that this is the best fight for Ricky in the long run. As Ricky gets older he is struggling to make the weight for this current division and the next sensible step seemed to be to move up to lightweight.”

My, the timing is very convenient for Burns, isn’t it? With a talent like Broner breathing down his neck and the high likelihood that he would have been knocked out by Broner, Burns decides to move up and fight for the vacant WBO strap at lightweight in what is now a weakened division now that Marquez has vacated the WBO title. If Burns can beat Katsidis, he’ll have nothing but softness awaiting him for some time to come. The only guy he has to worry about that is currently ranked by the WBO in the top 15 is Kevin Mitchell, but Warren might not want to waste one of them by pitting them against each other when there’s another available title with the WBA belt vacated by Marquez as well.

Katsidis might even be too good for Burns. He’s a bigger puncher and a lot quicker. If he’s got anything left after his beating at the hands of Robert Guerrero not too long ago, I can see him handing Burns a royal spanking. I’d much rather see a rematch between Katsidis and Mitchell, who Katsidis already destroyed last year in Ma, but a Burns fight could be a decent scrap for as long as it lasts.

Katsidis has a real chance here to score a knockout early in the fight because Burns seems to imagine himself as a slugger but he can’t punch. He’s done well against the little known weak opposition that was fed to him after he picked up the WBO super featherweight belt last year. Katsidis is a huge step up from those obscure guys that Burns has been put in with, and it will be interesting to see if Burns goes out looking to slug with Katsidis like he always does or if he’ll get a clue that this might not be the smartest thing to do.

It’s too bad Burns didn’t stay at super featherweight to fight Broner, because it would been fun to see how Burns would have reacted to Broner’s massive power, speed and youth advantage. I think would have been an epic slaughter along the same lines as Broner’s recent 1st round knockout win over Jason Litzau.