Ortiz believes the time is right to defeat Mayweather 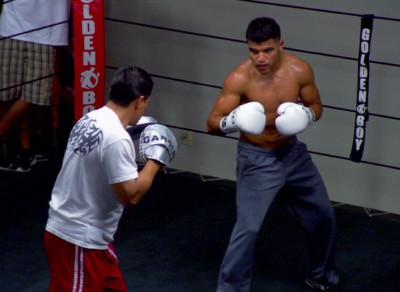 By John F. McKenna (McJack): World Boxing Council (WBC) welterweight champion Victor Ortiz (29-2-2, 22 KO’s) thinks the time is right for him to defeat Floyd Mayweather (41-0, 25 KO’s). Of course that is pretty much what you would expect to hear from a fighter who is an overwhelming underdog in an upcoming fight.

The reasoning by many boxing fans as to why “Money” is such an overwhelming favorite is that many boxing fans suspect that Floyd would not have selected an opponent who could seriously threaten his “41-0”.

Boxing fans also believe Mayweather’s obsession with protecting his undefeated record is the real reason he has not stepped into the ring with his arch rival Manny Pacquiao. But there are some who think “Vicious” has a real shot at beating Mayweather. They point to all the instances throughout the long illustrious history of boxing where huge underdogs have indeed been victorious. Jack Dempsey was given very little chance in his “David and Goliath” matchup against the towering Jess Willard. Willard had knocked out the great Jack Johnson four years prior and at 6’6”, 245 pounds enjoyed a huge size advantage over the 6’1”, 185 pound challenger. But Dempsey came out of Toledo, Ohio on July 4, 1919 with the heavyweight title.

Max Baer was also a sure win against the “Cinderella Man” Jimmy Braddock in their historic battle in 1935, but on fight night Braddock won a convincing victory. Cassius Clay stopped the unbeatable Sonny Liston in 1964. “Iron” Mike Tyson was already thought to be a future ring great when he was stopped by Buster Douglas in 1990.

The point is that no one really knows what is going to happen when two talented fighters step into the ring against each other and circumstances do change. Victor Ortiz is not the same fighter he was when he lost to Marcos Maidana in June 2009. For Ortiz the Maidana fight was a watershed moment. He feels that the Maidana fight made him a better fighter. Since that fight Victor has had a rededication to his boxing career.

The Ortiz camp thinks that much hype has gone into building Mayweather into the Mega Superstar he is in boxing. Victor Ortiz says that he has not bought into the hype surrounding Floyd Mayweather, where the media hangs on to his every word and reports his every move.

Ortiz was not supposed to defeat Andre Berto in April, but he was transformed as a fighter and came through with flying colors. There is no denying that Mayweather has a vast edge in experience and Ortiz is fully aware of that. He feels that his skill as a fighter has been underestimated while Mayweather has been riding the wave of media hype. Ortiz to be sure recognizes that Floyd Mayweather is a very good fighter, but he insists that he is not in awe of him and he will be the one to shatter Floyd’s aura of invincibility.