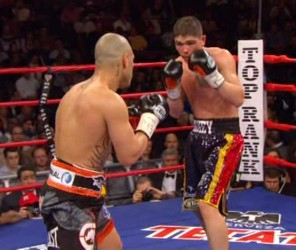 By Ian Aldous: Michael Jennings (36-3) has been a mainstay of the British boxing scene since 1999 and he’s achieved great success having won British and WBU titles in the welterweight division. This week he took the time to talk with me about the following topics.

It’s been almost a year since we last saw you fight. Why have you been away from the ring for so long?

MJ “To be honest with you, I’ve not been out for a year through injury but for the last couple of months I have been injured. I hurt my shoulder in the gym and I thought I’d just pulled a muscle but the next day I couldn’t move my arm and it didn’t get any better for a while, so I started getting physiotherapy and that didn’t help and then I went to a chiropractor and that didn’t help. I had an MRI scan and got the results last week and I’ve got a 6mm tear in one of my tendons in my shoulder. This is the longest time I’ve ever gone without training in my 20 year amateur and professional career and it’s really, really frustrating.”
Where do you currently rank yourself in the domestic welterweight division?

In February 2009, you fought Miguel Angel Cotto for the vacant WBO welterweight championship in New York (TKO loss in round 5). Going into the fight, how confident were you that you could get the win against one of the best fighters in the world?

MJ “When I first found out I was fighting him it was a shock, even though I was ranked no.1 by the WBO I still didn’t expect the call to fight him. I knew I really had my work cut out here (laughs). The more I watched him, the more I thought I could do alright against him and I believed in myself and my trainers and all the lads in the gym believed in me. People might think I’m daft but I went there to win and I didn’t have intentions to just go there for the money. I just got beat by the better boxer. There’s no shame even though at the time I was very upset.”

What was it like being part of such a big fight?

MJ “It was brilliant. It was good because there was a lot of attention on the fight but there was a lot of negative attention as well. I was trying to think positive, positive, positive but when I went over to America at the press conference, everyone was asking if I’d last five rounds and it started to hit home that no-one was giving me a chance.”

You’ve been a pro for 12 years now and you’ve won English, British and WBU championships in the welterweight division. What are the goals for the rest of your career?

MJ “I want to win the British title again. I want to win it outright and if anything comes after that then I’ll be happy. When I started boxing I wasn’t someone that said I’m gonna be a world champion, I never thought that fight-by-fight whether I was fighting a four rounder or six rounder, which in a way it might have been a bad thing because if I’d been shouting my mouth off a little bit more then I might have got a bit more attention although I have had a decent amount of attention without shouting my mouth off and that goes to show that my fists have done the talking rather than my mouth.”

Can you pick out a single highlight of your career that you would call as your best moment inside a boxing ring?

MJ “It was probably when I boxed Jimmy Vincent and won the British title in the first round. When I got the shout that I was fighting Jimmy Vincent, I was made up. I thought it was gonna be 12 rounds, a tough 12 rounder and that’s what I trained for. I trained hard and when I knocked him out in the first round it was unbelievable. I swear to God afterwards that because I dreamt about it so much for weeks and weeks and I must have boxed him 400 times before I actually got in the ring! After I had the fight and I was in the shower, I swear I was nipping myself because I thought I was dreaming and thinking, please don’t wake up!”

Check out the official site of Michael Jennings located at www.michaeljennings.co.uk

« Helenius not impressive, looks like a poor version of Tyson Fury

Froch alarmed with Ward’s past link with Conte, wants drug testing for 10/29 bout »