Helenius not impressive, looks like a poor version of Tyson Fury 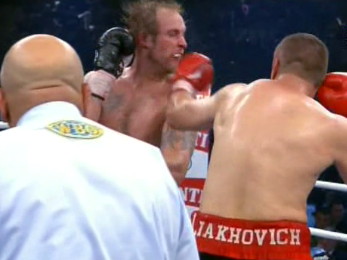 By William Mackay: Undefeated heavyweight contender Robert Helenius (16-0, 11 KO’s) defeated former WBO heavyweight champion Sergiy Liakhovich (25-4, 16 KO’s) by a 9th round TKO on Saturday night. A lot of boxing fans are really excited about the 27-year-old Helenius, seeing his win as a sign that he’s got the talent to compete against the Klitschkos and the other top heavyweights in the division.

I don’t agree. I saw a very average fighter in there in Helenius, showed no jab, hand speed, defense of foot work. Helenuus was a slow plodder facing a rusty past his best Liakhovich. This was a fighter that was pretty designed for Helenius to look good against and he still didn’t look good. This was someone that Helenius should have been able to easily beat, yet he took an enormous amount of punishment from Liakhovich before bailing himself out in the 8th and 9th rounds when he hurt Liakhovich.

Helenius lost most of the first half of the fight by throwing punches and not using his jab. I can understand why he wasn’t throwing his jab because he’s so slow and his jab is so weak. When he was trying to throw jabs, Liakhovich was walking through it and tagging him in the midsection.

I see Helenius as a poor man’s Tysyon Fury. He can punch better than Fury, but he doesn’t have Fury’s work rate, speed or movement. I think those three assets are much more important than the power edge that Helenius has over a guy like Fury.

Helenius isn’t a huge puncher, but he can punch. The problem is he doesn’t throw enough punches and he’s mainly dangerous if you sand in close right in front of him the way that Liakhovich was going. You saw what Helenius can do when he landed some big uppercuts in the 8th and 9th round to put Liakhovich down. I think Fury would have no problems avoiding those shots and even if he did get hit one, he would take it really work Helenius over with his much higher work rate.