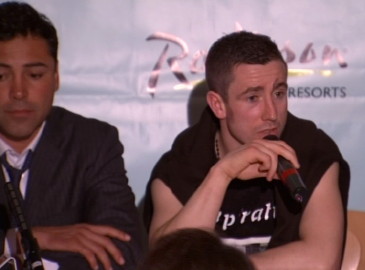 By Scott Gilfoid: Paul McCloskey (22-1, 12 KO’s) is under the impression that he’s going to outbox Breidis Prescott (24-2, 19 KO’s) on September 10th and make him look bad in their WBA light welterweight title eliminator bout. Poor, poor McCloskey, I almost feel sorry for the deluded guy. He so badly wants to win this fight and get a second chance at fighting Amir Khan.

He already royally blew it when he did get the chance by just running around like he was playing dodge ball. It was sad to see McCloskey only trying not to get hit and not doing a thing on offense. In a word it was pitiful. McCloskey is now using the same misguided game plan for his fight against Prescott on September 10th. When will he ever learn. In boxing you have to be versatile.

There’s the yin and yang, and that business. You can’t just be trying not to get hit and think you’re going to beat guys. You have to have some offensive talent, and unfortunately I hate to say it, McCloskey has none. Defensively, McCloskey is an A+ fighter, but offensively, he’s C- all the way. I think he’s incredibly poor on offensive and that’s not going to get you a win over a guy like Prescott.

With no resistance to worry about, Prescott is going to slick right throw McCloskey’s defense like its a tab of soft butter that’s been sitting out of the refrigerator all day long. It’s going to easy as pie to close the distance and knock McCloskey cold. Like I said before, I just hope Prescott doesn’t brained from someone throwing a bottle from the crowd. I’d hate to see Prescott win the fight by knockout and then get knocked out himself from something thrown from an angry crowd at ringside.

To hear McCloskey say it, he thinks that Prescott will he exhausted by the 6th round. I suppose that’s when McCloskey will start throwing his feather-duster punches. Oh this is going to be too funny. I can’t wait until McCloskey attempts to throw one of his weak and painfully slow punches and gets immediately clocked by Prescott. I guess that’s when the debris may start flying. God, I hope not.

How long will Alfonso Gomez hold up under the pounding from Saul Alvarez? »