How long will Alfonso Gomez hold up under the pounding from Saul Alvarez? 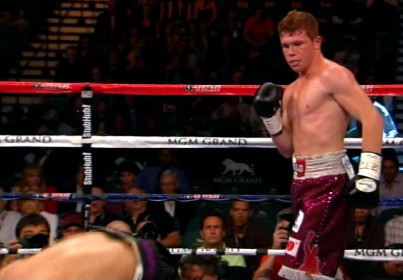 By Dan Ambrose: The management for WBC junior middleweight champion Saul Alvarez (37-0-1, 27 KO’s) has really picked a soft one for his 2nd title defense of his World Boxing Council belt on September 17th against Alfonso Gomez (23-4, 12 KO’s). Sometimes the sanctioning bodies gets it right with their rankings of fighters, but most of the time they’ve got some bizarre choices for higher ranked guys.

I see this as the case with the number #7 ranked WBC junior middleweight contender Gomez. That guy isn’t a junior middleweight as far I’m concerned, and no way do I think he deserves to be ranked over guys like Carlos Molina and Yudel Jhonson to name just a couple of contenders. This is a mismatch for Alvarez, and it’s good easy match-making done for him by his promoters from Golden Boy Promotions.

At best, I see Gomez hanging around for maybe five rounds in this fight if Alvarez takes it easy on him and doesn’t press the attack. With Alvarez, he lets inferior guys hang around while he picks them apart slowing and painfully over the course of his fights. That’s obviously something that Alvarez’s management needs to work on, because Alvarez really needs the killer instinct if he wants to avoid taking punishment himself by letting his fodder opposition hang around for 12 rounds while he tinkers away at out-boxing them.

Watching Alvarez slowly beat guys like Matthew Hatton and Ryan Rhodes, neither of which were anywhere near his class, is like watching a young George Foreman try to outbox someone like Joe Frazier. It’s a waste of Alvarez’s talent to be trying to box guys that he can easily blast out in two or three rounds by attacking them with a flurry of shots. Gomez is a step below Rhodes and Hatton in my estimation, and certainly someone that Alvarez can take out in two rounds if he attacks him.

I don’t know that he will because he’s showing signs of immaturity at this point in his career. But any rate, I still don’t think Gomez is going to last long even with Alvarez just bludgeoning him with hard shots one after another in this fight. I see Gomez getting hit with a hard body shot and going down. Once he’s down, I see the fight ending soon after because Alvarez shows the killer instinct once he’s got a fighter on the canvas. He’s smart enough to go back to what put that fighter down in the first place, and if he seems that Gomez can’t take it to the body, which is what I feel is his major weakness, then Alvarez will go back to that area until he ends the fight.