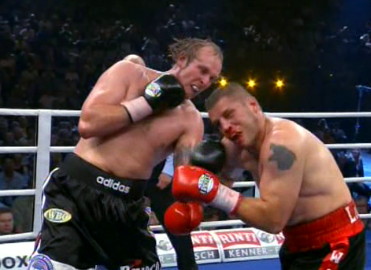 Liakhovich had the more talent of the two fighters and was really giving it to Helenius for seven rounds of the fight. Liakhovich’s mistake was made when he stood too close to Helenius in the 8th and was hurt with an uppercut and a chopping right hand that landed to the back of his head late in the round. Liakhovich took a knee to try and regain his senses.

Liakhovich was still hurt when the rounded ended and never fully covered. In the 9th, Liakhovich attempted to fight back, which wasn’t a wise move because Helenius unleashed a flurry of shots and caught Liakhovich with a powerful left uppercut. Helenius continued to flurry on Liakhovich until he collapsed just as the referee was rushing in to halt the fight.

Liakhovich’s nose was broken in two places from a jab he took in the 6th round. Helenius has good punching power and reminds me of George Foreman when he made his comeback in his 40s. Helenius is very slow like Foreman was back then, throws few punches but makes the most of them when he lands. He’s got a very good uppercut but doesn’t have Foreman’s great jab or boxing ability.

Helenius will have problems against the bigger heavyweights that can box and punch in the heavyweight division like th Klitschko brothers, David Price and Tyson Fury. Those guys will beat him, as would fighters like Odlanier Solis, and Alexander Povetkin.

« Povetkin could be facing 49-year-old Holyfield next