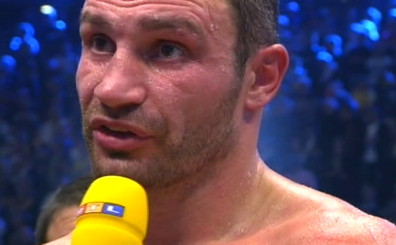 By Zirny Malenky Dmitry: Heavyweight contender Tomasz Adamek (44-1, 28 KO’s) looks to want to get it over with quickly on September 10th in his title fight against WBC heavyweight champion Vitali Klitschko (42-2, 39 KO’s) by going straight at Vitali to try and take him out.

This is the last thing that anyone would expect of the small, light-hitting and sometimes fragile-chinned Adamek because it means certain destruction for him. I thought it’s perhaps for the best this way. At least by rushing Vitali, Adamek will be able to go out in a blaze of fire rather than running all night long and getting knocked out anyway.

On the one hand, the end will come quickly with a mass of pain that will hurt incredibly but will end just as fast. But by running like Adamek normally does, he will end up taking much more punishment and pain by methodically getting beaten down until he finally gets knocked out. Adamek would likely get his face rearranged if he fights in this manner because he’ll take a lot more accumulated blows than if he rushes Vitali and throws shots in every direction.

It’s kind of like when a much bigger bully is pounding on a smaller guy in the school yard. Sometimes the guy gets up and in a range rushes the bully, and while crying in a rage, throws everything he’s got. The bully then calmly smashes the his opponent into the tanbark.

This is what will no doubt happen to Adamek. I think it’s smart of him if he’s serious about wanting to take the fight to Vitali. It will definitely be the opposite of Adamek’s past fighting style since moving up to the heavyweight division. Adamek usually runs around the ring, hitting and then scurrying away. It’s not pretty, but it’s worked against the old heavyweights that Adamek has been fighting.

Tickets on sale for Gamboa vs. Ponce De Leon fight on September 10 »