Povetkin could be facing 49-year-old Holyfield next 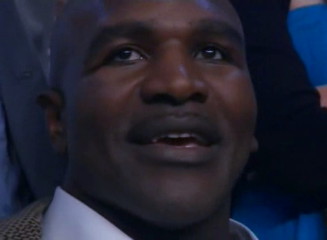 By Jason Kim: Alexander Povetkin (22-0, 15 KO’s) captured the vacant WBA heavyweight title last night with a 12 round unanimous decision over former WBA champion Ruslan Chagagaev (27-2-1, 17 KO’s) in Efurt, Germany. The win you would think would lead to Povetkin taking on one of the Klitschko brothers in one of the huge stadium fights that the Klitschko brothers are known for.

However, Povetkin’s trainer Teddy Atlas didn’t want to speak about a possible Klitschko-Povetkin bout after the fight and brushed away the topic when it was brought up by the Associated Press. The fighter that Povetkin will likely be facing is soon to be 49-year-old Evander Holyfield, who was sitting with Povetkin’s Sauerland promoters the entire fight at ringside.

Holyfield’s presence seems to indicate that he will be Povetkin’s first title defense. It would be disappointing one, to be sure. Holyfield hasn’t looked good in many years and recently struggled against journeyman Sherman Williams after getting badly hurt by him several times.

It’s hard to imagine Povetkin facing a guy that’s nearly 50-years-old, but that may end up happening. It’s obviously a fight that would take place in Germany where Sauerland is located, and it will probably do well. However, Holyfield would have no chance of winning. In his prime, he would easily beat a limited fighter like Povetkin, but not now. Holyfield is so far past his prime that it would be truly an ugly mismatch. Despite showing very little of his old skills in the past 10 years, he’s still been given two title shots, losing both of them.

Povetkin didn’t look very good against Chagaev. Indeed, both fighters looked poor. Povetkin fought cautiously, not throwing a lot of punches and looking not to get hit. He got rocked by a left hand in the 6th from Chagaev, and continued to take big shots in the 7th and 8th. But with a lot of in between rounds motivation frmo trainer Atlas, Povetkin turned up the heat on Chagaev and dominated the action – if you want to call it that – from the 8th round on. Povetkin looks small for a heavyweight, though, and lacked power in his shots.

« Froch alarmed with Ward’s past link with Conte, wants drug testing for 10/29 bout