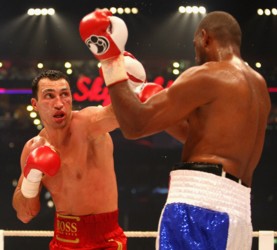 By Eric Thomas: IBF mandatory contender undefeated Alexander Povetkin (19-0, 14 KO’s) would like to fight IBF/WBO heavyweight champion Wladimir Klitschko (54-3, 48 KO’s) in Moscow, Russia. However, Klitschko, 34, will likely prefer the fight to take place in Germany where he fights most of his fights. Currently, the September 11th fight is tentatively scheduled to take place in Frankfurt, Hessen, Germany. This could obviously change if both parties can find a suitable substitute.

Although Povekin, 30, lives in Moscow, it probably won’t be much of an advantage for him if he does end up fighting Wladimir there because the Klitschko brothers are very popular in Russia, and likely a lot more popular than Povetkin. Negotiations between Klitschko and Povetkin are underway but they are going slowly, as Klitschko is still looking to put together a fight with WBA heavyweight champion David Haye.

The IBF ordered Klitschko to fight Povetkin on September 11th, after Klitschko’s attempts at negotiating a fight with Haye ended in failure. The problem with the Povetkin-Klitschko fight taking place in Moscow would be finding an arena large enough to make it a better option than Germany. Klitschko can fight in front of huge crowds of 60,000 fans in Germany. It might be difficult to bring in similar numbers in Moscow unless the fight is marketed well and even then, it will be a huge gamble.

Povetkin has been fighting mostly B level opponents for the past two years since winning the IBF heavyweight eliminator spot in a mini tournament in 2008. Povetkin beat both Chris Byrd and Eddie Chambers to become Wladimir’s mandatory challenger. Since then, Povetkin has beaten Taurus Sykes, Jason Estrada, Leo Nolan, and Javier Mora. Povetkin has seemed unwilling to take on dangerous fighters while waiting for his heavyweight challenge. However, this will probably be a fruitless attempt as Povetkin is nowhere near the class of Wladimir and will either get badly schooled or taken out. Povetkin matched up much better against Haye. That’s who he should be fighting, not Wladimir.

Klitschko is coming off another easy defense of his heavyweight titles, dominating and stopping Eddie Chambers in the 12th round in March. The fight was totally one-sided and not particularly interesting to watch because Chambers was playing it safe for most of the fight and looking like he was in the survival mode. In his bout before that, Klitschko destroyed former WBA heavyweight champion Ruslan Chagaev in n 9th round TKO in June 2009. That was supposed to be Haye’s fight, but he came up lame with a back injury weeks before the fight and couldn’t make the date.

« Booth: “Haye will be called a coward if he doesn’t face the Klitschkos”