Say A Prayer For The Klitschko Brothers on Kiev Battlefield: Will They Live To See Tomorrow?

By Robert Brizel – “I have to do that.” These are what could be the last words of Vitali Klitschko, the former World Heavyweight champion, who, along with his brother, Wladimir Klitschko, also a former World Heavyweight champion, are both fighting through the days and nights now in Kiev, Ukraine against bombing and attacking ground Russian Military Forces. This weekend, the final weekend of February 2022, could be the final weekend of their lives. Russian Forces have already captured the former Chernobyl Nuclear Reactor. The Russian Forces are currently surrounding Kiev, Ukraine, where Dr. Vitali Klitschko is the Mayor of the city, and serving in the Ukrainian Army Reserve with his brother Wladimir Klitschko in defense of Kiev.

The three kings, as in the Klitschko Brothers, and current World Heavyweight champion Oleksandr Usyk (who just flew back to Ukraine to support his homeland) could conceivably die in the battlefield, tonight, tomorrow, or in the next few days and nights. Are there any words which could justify an attack which is a prelude to probable world war, which could maim, injure and conceivably kill three present or former world heavyweight champions, with families, and wives, and children, filled with a love of country and patriotism for the independent state of Ukraine? 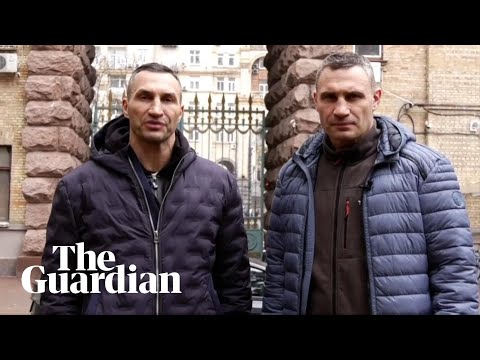 The Russian Federation has endured eight years with 14 thousand deaths on the Russian and Ukrainian side in border areas inside Ukraine populated by ethnic Russian-speaking citizens in the Donbas region of Donetsk and Luhansk. Could it be that Mother Russia, in defense of its own after the fall of “The Iron Curtain” and the late declaration of Ukrainian independence, was pushed beyond the brink due to ethnic cleansing and genocide in the modern era, while the rest of the world ignored the problem because it was not “their problem”?

Dr. Ironfist is known as Vitali Klitschko, a father of three children, and currently, Kiev Mayor since 2014. Since retiring from boxing in 2013, he has earned a reputation for being fearless in politics. However, the battlefield of Ukraine versus the Russian Federation is a very different ring without ring ropes, and Klitschko may soon find himself in a corner from which he cannot escape. As sports journalist Kevin Iole of Yahoo wrote, Dr. Vitali Klitschko may have signed his own death warrant.” This is because Vitali has been loud in street protests, and in his political role as a mayor condemning the Russian Federation and its leader Vladimir Putin. If the Klitschko Brothers stay and fight, and Kiev is surrounded and attacked in a final Russian offensive, the Klitschko Brothers are going to die. Boxing will experience a tragedy in this era of a magnitude with such force it will send shock waves through professional boxing and professional sports.

There is no parallel to what is happening today, tonight, and tomorrow in Kiev and Ukraine. We can all pray for Oleksandr Usyk, Vitali Klitschko and Wladimir Klitschko, their families and fellow citizens. Wladimir, who is nicknamed “Dr. Steelhammer” and brother Vitali will soon find the weapons of his colleagues cannot match the military might of the Russian Federation Military Forces, without desperately needed military assistance from NATO and other foreign countries. They will fight and die for their country, for as long as their fight will last. It is not boxing, but it is a representation of their boxing competitive spirit. Of course, all war makes no sense. The pending possible deaths of millions of innocent people at this time in history in a war would be senseless, given man’s appreciation for life, and the lesson learned from the wars of the previous century. We can also pray for the military on both sides, given the ongoing loss of lives on both sides now.

The Ukrainian cry for help, no matter its nature, will probably not be answered, and within a few days, the odds say one of the three heavyweight champions of past and present are going to die. They will not leave their homeland. The fallen champions, if it occurs, will be seen as heroes in their homeland, but not to the rest of the world who cannot fully understand their plight, the reason for fighting, or anybody who would foolishly go to war during the time of the Coronavirus Pandemic, which has been evolved into a plague which will eventually infect over half a billion people worldwide. The world outside of Ukraine and Russia does not understand why the two sides would go to war during the COVID-19 time period, but when has war even had logic or rhyme or reason for occurring in the first place, even when millions of people eventually will die? Ukraine versus Russian Federation War, however it lasts, is as illogical and misunderstood as the Coronavirus Pandemic and its victims in its time. The Russian Federation policy of military aggression, at a time of world peace and universal suffering due to the Coronavirus, caught the world by surprise, a world which due to its other troubles may not want to get involved. How far will “The New Russian Revolution” last and spread? The world is watching at a distance.

Say a prayer for Vitali Klitschko. The day sports fans read this editorial may be his last. He should be remembered while he was alive as a great fighter, and a leader of his people, at a time when leadership and guidance were desperately needed. Say a prayer for both the Ukrainian people and the Russian people, for a war which will cost many lives, but still makes no sense, as too many human lives are being lost during the Coronavirus Pandemic without a world war or nations at war in the midst of a world already in crisis due to biological warfare, and nearly six million people dead already.