Booth: “Haye will be called a coward if he doesn’t face the Klitschkos” 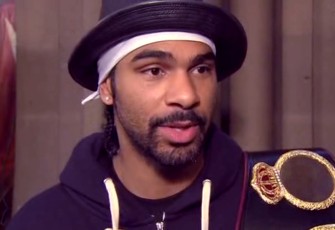 By William Mackay: Adam Booth, the manager/trainer for WBA heavyweight champion David Haye seems to understand the predicament Haye’s in right now in trying to decide which fighter to take next. Boxing fans want Haye to fight the Klitschko brothers, but Haye and Booth are seeing how popular a fight against Audley Harrison would be back home in Britain. Booth commented on all this in an article by Ron Lewis at Timesonline.co.uk, saying “As a boxing fans, I hate the fight [Haye vs. Audley Harrison], because Audley has not boxed anyone in the top 20, but I know that maybe David didn’t deserve a shot at Valuev. Within Britain it will be a fight that people would love to see, but Haye will receive a lot of criticism worldwide. he will be called a coward for not facing the Klitschkos and his credibility will be shot to pieces.”

I hate to break to Booth, but I think Haye’s credibility is already eroding as fast as the ozone layer. All Booth has to do is take one look at a typical boxing forum, and he’ll see at least five threads talking about how Haye is ducking the klitschkos. At this point, Haye might as well go ahead and fight Harrison because I think the damage has already been done. Haye has waited too long in responding to Wladimir’s video message – the one where he called Haye out.

All it would have taken is one minute for Haye to say something to the media but he’s not said a peep and that’s bad news if you want to keep boxing fans on your side. So much time has gone that Haye might as well take the fight with Harrison, milk his title a little bit, and then decide who to fight next. I honestly don’t Haye to fight the Klitschko brothers.

It won’t be interesting for me to see Haye get thrashed. I want him to milk his title for as long as possible and to keep on ignoring the Klitschko brothers. The old WBA heavyweight champion Valuev never fought the Klitschko, so Haye is just a continuation of that as far as I’m concerned. But mostly I think Haye is good for boxing but not if he fights the Klitschko brothers.

If he fights them, he probably gets destroyed and then no one will take him seriously anymore. It’s better if Haye doesn’t fight the Klitschkos and keeps destroying the sorry opposition in the heavyweight division until Haye retires at 31. I think Haye would be a good weak version of Mike Tyson, only without the steel chin. Tyson didn’t fight Lennox Lewis until the end of his career and never fought Riddick Bowe at all, even though Bowe was considered to be the best heavyweight in the division for a short period of time in the early 90s.

Booth says “Audley has to believe he has more of a chance of beating David than he does Wladimir or Vitali. I don’t think he lasts four rounds with any of them, but with David he has got to have that belief that he finds his b****ks and David’s chin at the same time.” It sounds like Booth is leaning in putting Haye in with Harrison. I think that’s a good idea for him to do that. Haye can beat Harrison, unless Haye gets tagged with one of Harrison’s left hands.