Abraham crushes Taylor: Could Jermain be replaced by Green or Miranda? 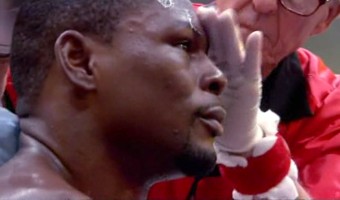 By Jason Kim: After losing by a 12th round knockout to former International Boxing Federation middleweight champion Arthur Abraham (31-0, 25 KO’s) on Saturday night with only six seconds to go in the bout, there are questions whether Jermain Taylor (28-4-1, 17 KO’s) will continue forward in the Super Six tournament. Taylor, 31, was viciously knocked out by a hard right hand from Abraham in the waning seconds of the bout, causing Taylor to fall back first on the canvas with the back of his head bouncing off the canvas hard.

Taylor’s body spasmed as he lay on the canvas with his arms stretched out in front of him and his legs stiff in a classic sign of a fighter suffering from a concussion. The bout previous to this was fairly close, as Taylor had won many of the earlier rounds but had – as usual – faded in the 2nd half of the fight. A lot of credit has to be given to Abraham, because he started pouring in the power shots in the second half of the fight and was able to stagger Taylor with a big right hand at the start of the 9th.

However, Abraham’s work rate was very low in most of the rounds. The difference here is that Taylor was only jabbing and not trading much with power shots. This enabled Abraham to take many of the rounds based on his harder shots. However, he wasn’t very impressive despite getting the knockout win.

The loss for Taylor, his fourth in his last five fights, appears to be a signal that he needs a break from boxing to recover. This was his third knockout loss in his past five fights. Dan Rafael of ESPN says that Taylor could be replaced by super middleweight contenders Allan Green (29-1, 20 KO’s) or Edison Miranda. Neither of the picks are all that appealing, as Green looked especially bad in winning a 10 round decision earlier this month against Tarvis Simms.

Although Green has an impressive record that might appeal to some fans, he hasn’t fought anyone of real talent other than Miranda, who beat Green by a 10 round decision in 2007. Rafael says that Green’s promoter could put him in a rematch with Miranda, and the winner would then be the alternate to replace Taylor, if it comes to that. It might not be a bad idea, but it will take some time before Green and Miranda can fight again, because Miranda has a fight coming up next week on October 22nd against Francisco Sierra.

What makes Miranda a disappointing choice, however, is that he’s already been beaten by both Andre Ward and Abraham. But at least Miranda would make it interesting against most of the Super Six fighters with his big power. In a rematch with Green, I would have to favor Miranda because of his huge punching power. He seemed to really have Green’s number last time out, knocking him down twice in the fight.

« Decisions, decisions; Was Froch/Dirrell a bad one and what will Jermain Taylor decide to do next?

Haye vs. Valuev: David Not afraid of big Nikolay »