Jose Uzcategui vs. Caleb Plant next Sunday, Jan.13 on FS1 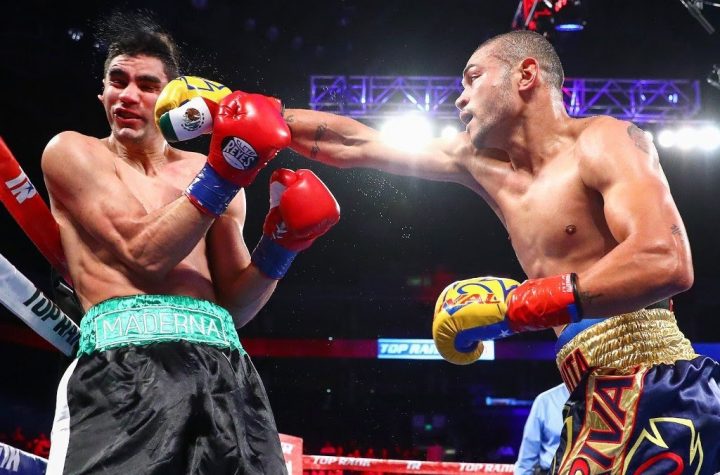 In the co-feature, unbeaten super bantamweight contender Brandon ‘The Heartbreaker’ Figueroa (17-0, 11 KOs) will be facing former 2-time 122 pound world title challenger Moises Flores (25-1, 17 KOs) in a 10 round fight. The co-feature bout might wind up having the most action on the card, since Caleb Plant, the opponent for Uzcategui, is a pure boxer, who will likely be using the hit and move style the entire 12 rounds on Sunday night. That fight could be tough on the eyes if Uzcategui can’t trap Plant and force him to fight the way he did against Andre Dirrell in their rematch last March. Uzcategui forced Dirrell to fight him, and the results were positive.

The 26-year-old Plant, who goes by the nickname ‘Sweethands,’ does not have much punching power to speak of, and his temperament is not that of slugger. Plant’s first instinct when fighting someone with power that is pressuring him is to reverse gears, circle the ring and look to jab from a safe distance. Plant is not someone that is going to stand his ground and fight it out until the bitter end. That’s why it’s imperative that Uzcategui, 28, use his wheels to chase Plant down. If Uzcategui fails to cut the ring off to force the action, Plant will stay on the outside and jab and pot shot his way to a dull 12 round decision victory on Sunday night. Plant isn’t a combination puncher. When he does throw power shots, he prefers the single pot style that we’ve seen from other pure boxers like Floyd Mayweather Jr. It’s going to be very hard for Uzcategui to win this fight if he can’t keep Plant from fighting with his style. For Uzcategui to win this fight, he’s got to impose his will on the fleet of foot Plant. As long as this fight lasts, Plant is going to be trying to box Uzcategui’s head off, and win rounds by being clever.

Also on the card is light heavyweight slugger Ahmed Elbiali (17-1, 14 KOs) facing a name from the past in 39-year-old Allan ‘Ghost Dog’ Green (33-5, 22 KOs) in a 10 round fight. Green is a name that older boxing fans might remember from his stint in fighting in Showtime’s Super Series tournament many years ago in June 2010. Green is making only his second fight back since returning from a five year layoff from 2013 to 2018.

Green defeated Edgar Perez by a six round unanimous decision last year in January 2018. Green has now been out of the ring for 12 months. Green’s inactivity and his age might give him a lot of problems against a slugger like Elbiali. But if Green still has the boxing skills and the will to win that he possesses eight years ago, he could give Elbiali a tough time on Sunday, and perhaps beat him. Green has past losses to Blake Caparello, Mikkel Kessler, Glen Johnson, Andre Ward and Edison Miranda. Green’s best wins have come against Ruben Williams, Carl Daniels, Carlos De Leon Jr., Anthony Bonsante, Tarvis Simms, Donny McCrary, Jaidon Codrington, Ola Afolabi, Sebastien Demers and Renan St Juste.

Green beat some good fighters during his career. At one time, Green was someone that was going places in boxing. Unfortunately for him, he ran into some good fighters in Ward, Kessler, Johnson and Mirante, and he wasn’t ready for those kinds of guys. At his best, Green was a very good fighter. He’s done more in his career than Elbiali by far, but he was also a guy with a boxing background. Elbiali looks like a pure slugger, who is going to need to improve a great deal if he wants to amount to anything at 175. Elbiali would be better off moving down to 168 where there are fewer huge punchers. He’s not going to last long trying to battle guys like Oleksander Gvozdyk, Eleider Alvarez, Artur Beterbiev and Dmitry Bivol.

Elbiali recently lost to Jean Pascal by a sixth round knockout in December 2017. That was a huge setback for Elbiali’s career, as a lot of boxing fans thought he was capable of beating the then 35-year-old Pascal. As it turns out, Elbiali wasn’t in the same league as Pascal, and he was dominated from start to finish before being pulled out of the fight after the sixth round. Had the fight continued much longer, Elbiali likely would have been knocked out. In his last fight, Elbiali bounced back with a nice third round knockout victory over journeyman Zoltan Sera in June of last year. Sera is the type of guy that Elbiali is capable of beating. Elbiali has wins over mostly unknown fighters that are virtually unrecognizable names with most boxing fans. That’s why it was such a crazy idea for Elbiali to fight Pascal in 2017. He didn’t have the experience to be fighting a guy of Pascal’s pedigree.

Green has a lot more experience than Elbiali. This would be a total mismatch if Green was still in the prime of his career. However, the age and the inactivity likely has caused Green to lose enough from his game for a simple fighter like Elbiali to beat him. It still wouldn’t be surprising in the least if Green pulls off the upset in this fight. Green was always a good puncher, and he likely can still punch at 39. If Green is able to bounce some of his big overhand right hands off the chin of Elbiali early on, he could pull of an early knockout in this fight like he did against Codrington in 2005. Green beat Afolabi, a fighter that went on to do good things during his career. It’s hard to imagine Elbiali being able to hold his own against Afolabi, even now if he were to make a comeback.

Elbiali should win this fight based on his youth. He’s 11 years younger than the 39-year-old Green at 28, and he’s a good puncher. In theory, Elbiali should be able to press the aging Green hard in the early rounds, and force a stoppage by the sixth. However, the longer the fight goes, the better the chances Green wins. He’s going to be hitting Elbiali with big shots, and he’s not used to getting hit back by the soft opposition that he’s been fed by his management. Elbiali looked like he was in shock in getting nailed by Pascal with punches. It was a new experience for him, and he wasn’t ready for it.